First welcoming parishioners through its doors in the Medieval period, St Nicholas Cathedral in Newcastle has been experiencing somewhat of a Renaissance in recent years.

The cathedral is located right in the heart of the city and was previously a parish church before becoming a cathedral in the 19th century when the Diocese of the Newcastle was created. Whilst structurally the building has been well maintained down the centuries, the infrastructure has required some work.

With additional education space, office space, electrical and mechanical works all required a development package was put together in 2009 to revamp the cathedral.

“The development package put forward comprises 10 elements, at a total cost of £4million.

“After we had managed to raise the money for the development, the first thing we did was to purchase a beautiful Georgian building that is next door to the cathedral. We then moved all our offices into this building from the cathedral, thus creating educational space. 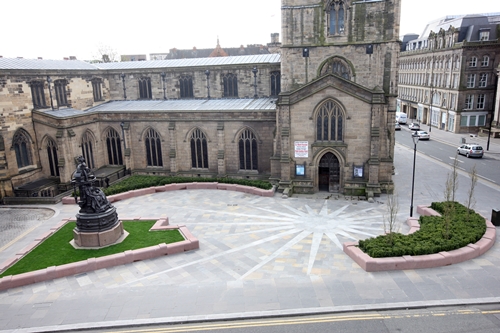 “The second thing we did was to redevelop St Nicholas Square in front of the cathedral. A local landscape artist worked with us and the city to remodel that space.

“In keeping with the open theme, we made sure access to the cathedral was made much more wheelchair friendly. We also contacted Houghtons of York, who are very skilled craftsmen, to complete work on the porches and the Greta West Door, which looked particularly forbidding. We are really happy with the work carried out by Houghtons, its first class.”

Running concurrently to these developments was the work carried out on the lantern tower of St Nicholas, speaking about this Michael added:

“People had a distinctive memory of the lantern tower being floodlit for a short period during the seventies.  We decided to include lighting within the scheme and we got our lighting designer to draw up a scheme. Fortunately the big local department store Fenwick paid for the lighting out of their charitable trust.

“Re-lighting the tower really has had an amazing effect, when you come into Newcastle on the train it is the first thing that you see.”

When asked about the current progress of the development, Michael said:

“Most recently we have replaced all the wiring and lighting and installed 100% low energy lighting, with the whole cathedral not lit with LEDs. The heritage lottery fund has provided the majority of funding for this work.

“We are now half way along; we have raised £2million and spent £2million. We still need to replace the heat delivery system  as it still uses the old cast iron pipes and radiators, what we need to do next is to take out the floor of the cathedral and put under floor heating in. This is going to cost £1 million and we are currently fundraising for that now.”

Michael went on to state how important the revamped St Nicholas Cathedral is for Newcastle, he said:

“The cathedral is a wonderful building, but up to now it has not been very well appreciated, partly due to the lighting and that the access wasn’t very good. This development has made the cathedral a much more accessible and friendly place, not just for worshippers. The cathedral can now also host lectures exhibits and concerts in the additional space.” 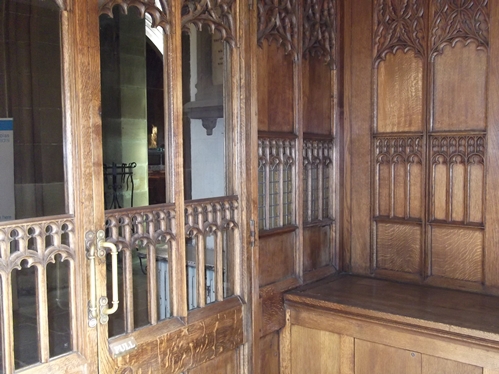 Purcell is the architects on the development and speaking about the works carried out a spokesperson for the practice said:

“We followed a challenging brief to rebuild the listed church to serve the current and future demands of the parish and wider community without losing its historic identity.”

For more information about St Nicholas Cathedral and to keep up with news about the development then visit www.stnicholascathedral.co.uk.

Houghtons of York are a well established family run business with a wealth of experience, specialising in high quality architectural joinery and woodcarving for clients throughout the UK.

The company has workshops based on the outskirts of York city and directly employs a team of highly skilled craftsmen who use traditional methods and materials to produce a broad range of bespoke commissioned work.

Houghtons tend to work on high end projects for the likes of the National Trust and English Heritage and most recently the firm has been working on the redevelopment of St Nicholas Cathedral in Newcastle.

“We have carried out works on the porch to the south entrance of the cathedral and we’ve also done the entrance doors and screens to the west end.

“As soon as the St Nicholas’ have funds available they have plans to refurbish and make alterations to the north porch as well, we’re hoping that we will stand ourselves in good stead for that work in the future.”

When asked about the difficulty of carrying out restoration works on such an old building, Roger added:

“It’s just a question of being very careful and matching up carvings and moldings, to what already exists. Really one of the greatest compliments a person can pay is by saying that they can’t tell where you have been.”

For more information about Houghtons of York the visit www.houghtons.plus.com.