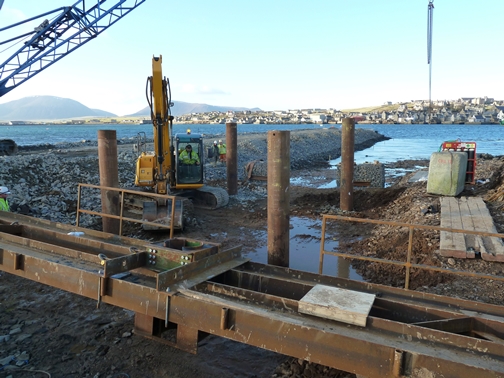 Given the green light in August last year, the £9.2 million pier plan for Stromness in Orkney is now progressing well with the piles for the pier being installed in February.

When complete the development will see the construction of a new 100-metre pier and associated access road in Stromness.

Together with developments at Lyness (island of Hoy) and Hatston (near Kirkwall), the Copland’s Dock pier forms part of Orkney Islands Council’s Three Ports Strategy to invest in major infrastructure projects that provide the marine renewable industry with upgraded and new-build pier and quayside facilities at key locations.

These new facilities will further put Orkney on the renewables map as the island is home to the European Marine Energy Centre (EMEC) – the world’s first accredited testing facility for wave and tidal energy devices.

Developments like that at Coplands Dock will assist EMEC in the trialing of technologies that will benefit commercial-scale marine energy arrays and also the fishing and aquaculture sectors.

“Orkney is the beating-heart of the global marine renewables sector. By investing in key projects such as Copland’s Dock pier, we can ensure that these islands and other Scottish communities retain our leading role as the wave and tidal energy sector moves towards industrial-scale manufacturing and deployment over the next decade. 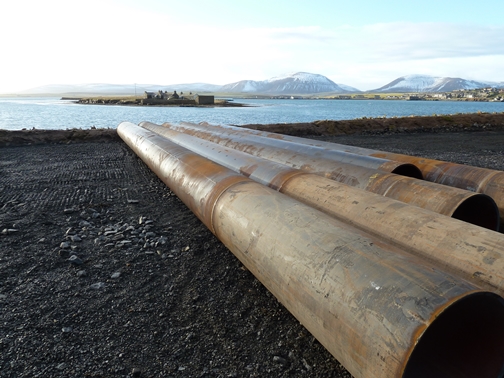 “A Highlands & Island Enterprise-commissioned study, to be published soon, has identified that in nine years since EMEC was set up, the marine energy industry has created around 250 jobs in Orkney, boosting its economy by tens of millions of pounds.  This local economic impact is predicted to increase four-fold by 2020 as test activity accelerates further and the roll-out of the Pentland Firth & Orkney Waters commercial lease sites begins in earnest.

“Orkney’s maritime community, with its ability to service the marine industry, is well-placed to capitalise on these economic opportunities. And, of course, the environmental, energy and economic benefits of the work being pioneered in Orkney and in other waters around Scotland’s coast will accrue to countries around the world, as we strive to build low carbon economies across the globe.”

“The Copland’s Dock facility will be invaluable to the marine renewables sector here in Orkney and it’s great to see government commitment to getting the right infrastructure in place to support the development of the industry.

“In the last couple of years we have seen activity at EMEC more than double, with 11 full-scale prototype marine energy devices deployed, or in the process of being deployed, at our wave and tidal test sites. The new pier will provide wave developers testing at EMEC’s wave test site, and those developing commercial projects along Orkney’s west coast, with nearby port facilities in sheltered water, an essential contrast from the harsh sea conditions that they face on site.” 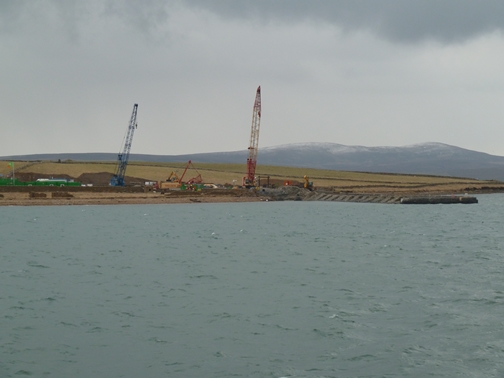 “Orkney is at the forefront of research, development and delivery of the next generation of power production. By working together to provide vital infrastructure and by supporting developers, suppliers, inward investors and local communities we can capture the full potential this emerging industry promises for Scotland.”

BAM Nuttall is the main contractors on the development and Foyle and Marine Dredging ltd is the dredging contractor at Copland’s Dock – which scheduled to be completed by February 2014.

The project has been funded by the Scottish Government, a £1.8million grant from the European Regional Development Fund and some £4.9million from Orkney Islands Council.