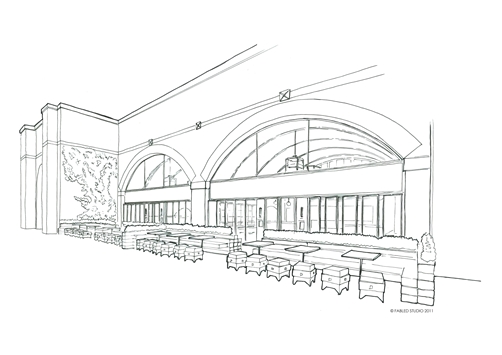 Taking its name from one of the steam locomotives that used to run the original East London line, Beagle will be housed in three railway arches next to Hoxton Station. The multi-faceted eatery, cocktail bar and coffee shop is the brainchild of Danny and Kieran Clancy.

“The site and location of Beagle, along with our talented Head Chef and culinary team will hopefully mean that the venue will be one of the best known in East London.”

“We had been looking for a site for some time, and chanced upon these three beautiful railway arches. We were pretty overawed by the site, which is in great condition. As soon as we laid eyes on them we knew that they would work perfectly for a restaurant.”

Fabled Studio is the designer that gave life to Beagle and speaking to Premier Hospitality, Designer Tom Strother said:

“Beagle was in the planning stages from late 2011, with work beginning in December last year the venue will be open by mid March.

“We started from scratch really as there was nothing in the way of furnishings or fittings – it was very much a blank canvas.

“It has quite a laid back feel with a lot of distressed antique finishes, blackened steel, grey leather upholstery and all the brickwork of the arch is exposed.

“To keep in with the design we didn’t want to have any exposure of air conditioning, so we had to dig underground to dig our air conditioning ducts, we’ve also installed all new drainage and mechanical systems.”

When asked how the restaurant would fair in the face of stiff competition, Tom added:

“I think Beagle works really well; it’s a natural progression to an area which is very forward thinking itself as a lot of exciting new projects are coming up all the time. Beagle however is taking this one step further – it is a refinement of taste.”

Beside from a bespoke setting visitors to Beagle can also expect a top quality menu brought to you by the culinary commander-in-chief James Ferguson, who was previously the Head Chef at the much loved Rochelle Canteen.

Time Out described the food on offer at the Canteen as ‘excellent’ and added ‘dishes are flavoursome and every ingredient counts’, visitors to Beagle are therefore in for a treat!

The food will be seasonal, produce led British cooking and menus are set to change daily. Expect plenty of grilled dishes as the kitchen will feature a traditional wood grill.

The tantalising dishes unveiled so far include a pig’s head croquette with gribiche, whole wild sea bass with samphire and cucumber and custard tart with poached rhubarb.

As for drinks, there’ll be cocktails – including some made with nettle and ginger house made cordials, rhubarb infusions and seasonal foraged ingredients – British beers and wines and for warmer times and there’ll also be a large outside seating area for 60 people.

For more information about the restaurant then visit www.beaglelondon.co.uk.

Specialising in bespoke commercial glazing, Farrow Glazing Systems have worked on a variety of high end projects from the London Eye to the Olympic Park.

Most recently the firm have been working on the hip new London restaurant, Beagle. FGS have fitted the distinctive glazed arched front to venue and speaking about the project, Director, Darren Farrow said:

“Due to the structure being both arched and concave it has been quite challenging as the windows have had to be individually handmade. We’re putting in a system of window that has never been used before; we have designed the fitting from scratch in collaboration with the client.”

When asked what FGS prides itself on, Darren added:

“We pride ourselves on our experience and creativity; we are able to create almost anything from glass.”