Dear readers,
Welcome to the latest edition of Premier Construction magazine.
This month we take a look at a selection of projects […] 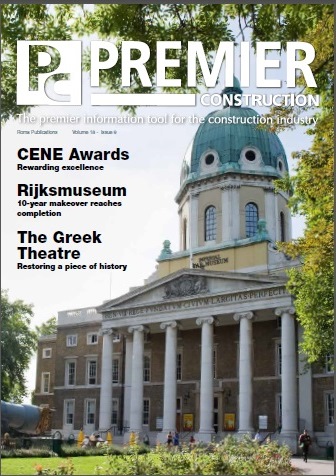 This month we take a look at a selection of projects that have been shortlisted for Constructing Excellence North East (CENE) Awards; we take a trip to the opening of Rijksmuseum in Amsterdam; and we oversee the refurbishment of The Greek Theatre.

The shortlist for the ninth Constructing Excellence North East (CENE) Awards –celebrating the success of North East construction projects and those working in the construction industry – has been revealed.

Premier Construction has been given an exclusive insight into some of the projects listed for this year’s awards, including the world class Durham Gateway facility which has been shortlisted for the Integration and Collaborative Working Award.  Steel Farm which is in contention for three awards, The Legacy – Sustainability Award, Innovation and Project of the Year Award is also featured in addition to the preservation works carried out on Coquet Island – that have garnered a Heritage Award nomination.

The awards are a significant event in the North East’s built environment calendar recognising the achievements of construction in the region during the past year.

CENE’s Chief Executive, Catriona Lingwood said: “Every year, we are impressed with the standard of entries we receive and this year’s entries have been no exception.

“The last few years have been incredibly tough for construction and these awards are a celebration of the great work that is still going on despite the tough economic climate.”

Meanwhile, following a decade of rebuilding, renovation and restoration works, the Rijksmuseum in Amsterdam has opened its doors. Spanish architects Cruz y Ortiz Arquitectos transformed the 19th Century building into a museum for the 21st Century.

Rijksmuseum opened to the public on Saturday 13th April with a festive programme on Amsterdam’s Museumplein, led by Queen Beatrix of the Netherlands who performed the official opening ceremony in front of the museum. Following the ceremony, which took place at noon, members of the public were given free of charge access to the museum until midnight.

And finally a project to refurbish Bradfield College’s The Greek Theatre is now underway. The project will see the historic site restored to its former glory following its closure in 2009. Work began on the project in April 2013 and is currently scheduled to reach completion in September 2013.

Join us now as we celebrate the developments that continue to shape our landscape.