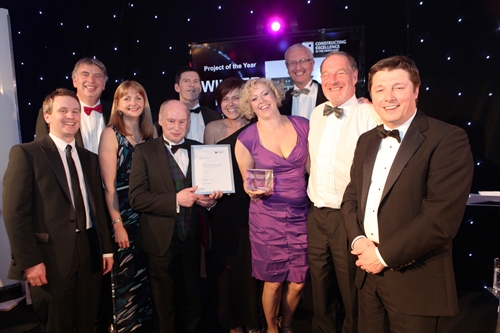 The shortlist for the ninth Constructing Excellence North East (CENE) Awards – celebrating the success of North East construction projects and those working in the construction industry – has been revealed.

Premier Construction has been given an exclusive insight into some of the projects listed for this year’s awards, including the world class Durham Gateway facility which has been shortlisted for the Integration and Collaborative Working Award.  Steel Farm which is in contention for three awards, The Legacy- Sustainability Award, Innovation and Project of the Year Award is also featured in addition to the preservation works carried out on Coquet Island– that have garnered a Heritage Award nomination.

The awards are a significant event in the North East’s built environment calendar recognising the achievements of construction in the region during the past year.

Over the last nine years, the awards have grown significantly with over 500 people turning out to see the best of construction in the North East being recognised for their efforts.

CENE’s Chief Executive, Catriona Lingwood said: “Every year, we are impressed with the standard of entries we receive and this year’s entries have been no exception.

“The last few years have been incredibly tough for construction and these awards are a celebration of the great work that is still going on despite the tough economic climate.”

Open to large and small businesses, winners are selected across 14 categories including Innovation, Integration, Value, Sustainability, Heritage and Young Achiever of the Year and go on to compete in the National Constructing Excellence Awards, held in the autumn.

The organisation’s mission is to deliver improved industry performance resulting in a demonstrably better built environment. With over 100 members in the region, their vision is for the UK construction industry to realize maximum value to all clients, end users and stakeholders and exceed their expectations through the consistent delivery of world-class products and services.

This year’s ceremony will be held at the Newcastle Gosforth Marriott Hotel on May 10 and will be hosted by former BBC Look North news correspondent, Wendy Gibson. This year will be a significant one for Constructing Excellence North East as they celebrate their 10th anniversary as the regional division of Constructing Excellence.

During the last 10 years, the organisation has morphed from a part-funded body delivering the regional development agenda, to a fully sustainable organisation supporting the region’s build environment in their agenda for improvement.

For more information about the CENE Awards go to: www.cene.org.uk/awards.