The Mersey Gateway Project has provided the inspiration for schoolgirls in Wirral to win over £2,000 of LEGO Education Robotics kits for their school after they won an engineering competition based on the project.

The all-girl team from Upton Hall School FCJ came out as winners as teams of pupils from schools across north east Wales, 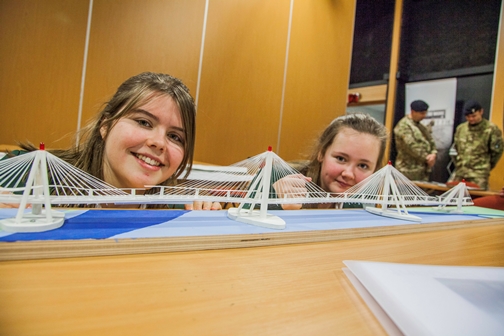 and north west Cheshire presented their designs for a new bridge over the River Mersey to an expert industry panel.

The Year 10 pupils from schools were challenged by Techniquest Glyndŵr science centre in Wrexham to come up with a design that would relieve congestion on the existing Silver Jubilee Bridge between Runcorn and Widnes.

Titled ‘Bridging the Gap’ and funded by the Royal Academy of Engineering, the challenge mirrored the real-life Mersey Gateway Project, which aims to achieve the same goals.

Real life engineers were linked to each school to give the students the best possible chance of winning.  The engineers gave advice on all aspects of the project from structural design to the actual design process, and from environmental considerations to aesthetics.

The finale, which took place at Glyndŵr University, pitted the schools against each other to decide which team had produced the best design. The winning school, Upton Hall School FCJ, is a Catholic Grammar School for girls aged 11-18.

“It’s great to see these students take on this challenging competition with such enthusiasm. We have all been really impressed with the level of detail in their designs, which goes to show how much effort has been put in.”

“This project has been an excellent opportunity for our pupils to work as a team on a real project beyond the normal curriculum and they have thoroughly enjoyed the experience. This was demonstrated by their commitment to work through their lunchtimes and after school for 4 months to complete their design and presentation. They particularly enjoyed having the input from our professional engineer, Nicola.”

Claire said: “All the schools taking part have done exceptionally well but the winning team from Upton Hall School FCJ really pulled out all the stops and I was very impressed with their knowledge and attention to detail. They are well deserved winners.”