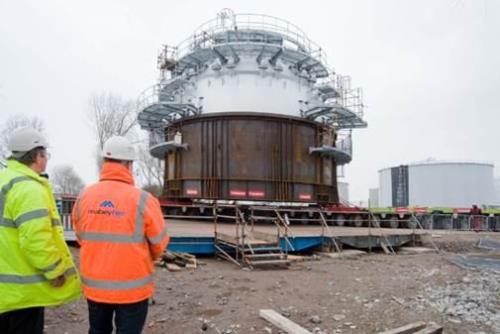 Mabey Hire, a  leading supplier of non-mechanical plant hire, was recently appointed by Hutchinson Engineering Ltd to supply a 33m by 16m Quickbridge Platform in order to move a 475 tonne cyclone head – the largest of its kind in Europe.

Hutchinson Engineering Ltd is the framework contractor for all structural steel supply on the Essar Oil Refinery in Stanlow, Ellesmere Port. The cyclone head at the site is the ‘beating heart’ of the entire plant, forming part of a RFCC unit (Residue Fluid Catalytic Cracking) which is vital to Essar’s annual production of three billion litres of petrol. The Oil Refinery has recently under gone a major refurbishment project to give the unit another 25 years of life – of which the replacement of the giant head is a key element.

There was a very tight timescale for supplying the crossing for the ditch; however, Mabey Hire was on hand on to help. With just four weeks’ notice Mabey Hire modified and fabricated special components to enable a Quickbridge system to be installed, including a bespoke designed platform.

With the replacement cyclone head weighing 475 tonnes the unit had to be delivered to the site on a special transport vehicle consisting of 22 axle lines, with each axle line consisting of four hydraulically controlled twinned wheels. The cyclone head had to move down the M56, onto the A5117 and then across a ditch into the main site. It formed the biggest load seen on the motorway for more than 25 years.

“The Stanlow refinery is a major economic driver in the region, which is why we the project needed to be completed in a such a short timeframe. Thankfully Mabey Hire was able to complete the project within deadline, in just four weeks.”

Mark Rooney, managing director of Mabey Hire, said: “We were thrilled to be part of such an extensive and well executed project.”