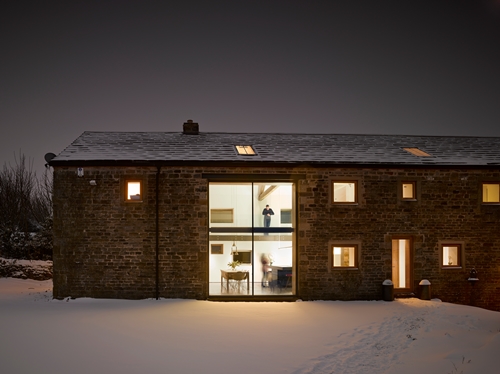 Completed in July 2012, the barn was transformed from its previous state into a modern, two-storey, four-bedroom house to provide residential accommodation for owners Steve and Amanda Wills.

Work began on Cat Hill Barn in July 2011, with Liverpool-based practice Snook Architects providing all architectural services. As the project involved the conversion of a Grade II Listed building, all work had to be conducted very sensitively and particular attention was made to rectifying a problem with the existing roof. 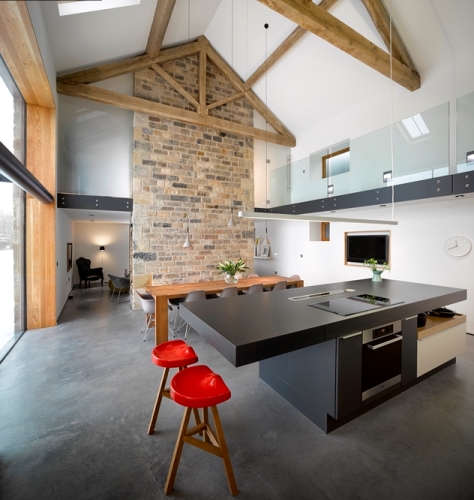 “When we took on the project the barn was pretty much in a state of collapse, with the roof in particular in urgent need of attention.

“After a bit of research we became aware that the roof had been worked on during the 1980s with new roof trusses installed at this time. However the weight of the stone roof on the trusses was pushing the walls out, which was likely to bring the roof down at any point and this was something we had to attend to first.

“We removed the roof, installed a new internal steel frame and rebuilt one of the main perimeter walls which had been pushed out of shape.” 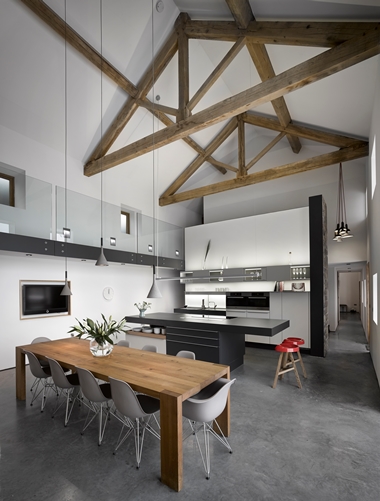 Originally Cat Hill Barn was designed to include three bedrooms, however this was later adapted to four bedrooms when the need for more accommodation became apparent.

Neil commented: “We started off the project with three bedrooms, but six months before we were due to complete the work Steve and Amanda announced that they had a baby on the way, so we suddenly had to find space for a fourth room.

“Planning was key on this project. It was about making the best use of the space available within the existing barn.”

Sheffield-based contractor Wett & Windy Ltd was the main contractor on Cat Hill Barn. Owned by Mark Wetton and Ian Miller, Wett & Windy undertake all aspects of building work, from new builds and extensions through to excavation and insurance work. 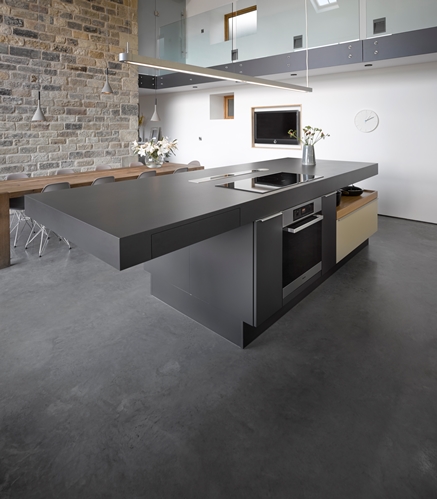 “This was the first project that we worked on with Snook Architects and it was great to be a part of this project. There were a few challenges on the site, but the work ran smoothly and the finished design looks great.”

Cat Hill Barn features a range of modern fixtures and fittings, including a stunning kitchen. Natalie Fry of Poggenpohl Leeds designed the kitchen, which was based on a brief from owners Steve and Amanda Wills.

As the former barn did not include windows, a number of new windows were installed into existing openings, including two large windows in the dining and living areas, offering beautiful views of the nearby valley. A ground source heat pump was installed in order to upgrade the boiler and the building was fully insulated.

To date, no landscaping work has been conducted on the project, however this is something which is in the pipeline. 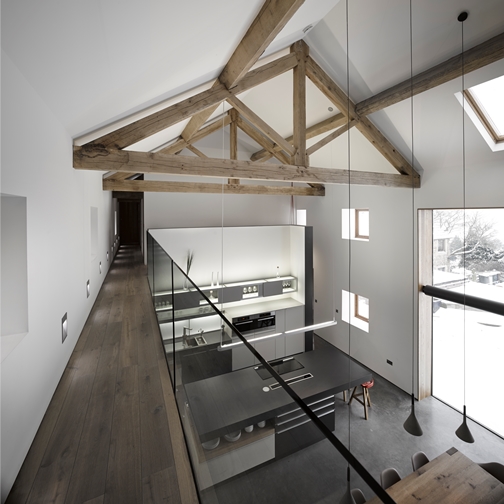 Cat Hill Barn has been shortlisted for a regional RIBA 2013 Award. This is the first time that Snook Architects has been in the running for a RIBA Award.

“Appearing on the shortlist for a RIBA Award is incredibly important to us and it is something we are very proud of. We have previously been associated with an award but we have yet to win one that is just ours, but even being on the shortlist means a great deal.”