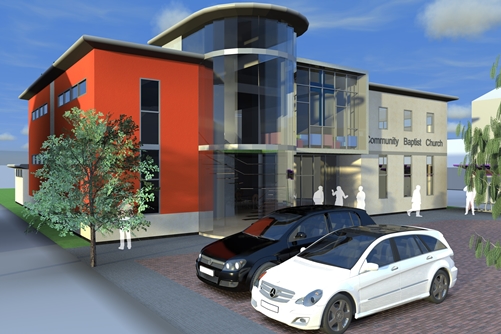 The project sees the existing church relocate from its home on Holway Road, Sheringham to a new location on Cromer Road. Work began on the project in October 2012 and is currently on schedule to reach completion in August 2013.

“Sheringham Baptists Church is a very successful church which has now outgrown its current site, so the aim of this project is to relocate facilities to a much larger site through the creation of a bigger building. Once complete the new building will be used by the congregation but will also act as a centre for the local community, providing a venue in the centre of town for clubs/evening classes and mother & toddler groups.

“The new building replaces a residential home which was previously housed on the site and at present we are a good way into the build. In fact the pastor has a wedding booked in for August, so we have to get the work finished in time for that!”

“The flat roof has been laid and the tiling installed, so we are currently wind and water tight. The windows will be installed shortly and then rendering will take place.”

The new building is being built from block and render, with a feature tower constructed using Pilkington Reglit Glazing. The new church is a two-storey structure, comprising offices, youth lounges, meeting rooms and ancillary areas, with an access lift and feature staircase. At the rear of the building is a single-storey worship area, along with an associated exterior space to be used for outdoor activities.

“My children attend the after school club at the current Sheringham Baptist Church, so to know that they will soon be able to go to a building that can offer more services and is far more varied is just grand. The new building will be more community based and accessible to all, and that really has been the major drive behind this project.”