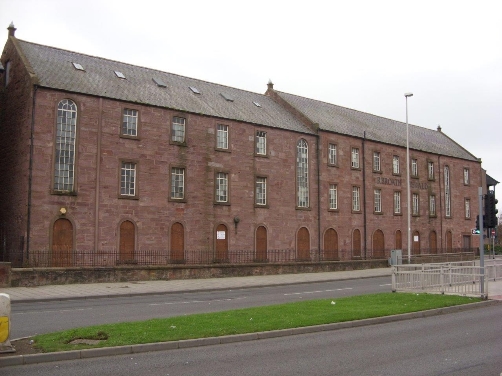 The 60-week project – situated on Burnside Drive – comprises the conversion of the 19th Century Brothock Mill building into twenty brand new flats. The new units will be split across three floors and once complete will provide affordable rental accommodation which is suitable for mature tenants.

Muirfield Contracts is the main contractor on the project, carrying out work on behalf of Caledonia Housing Association. Finlayson Architects is providing all architectural services on the housing project, whilst KLM Partnership are the quantity surveyors, and Morgan Associates consulting structural engineers.

Work began on the project in September 2012. During the early stages of the refurbishment the interior walls on the ground floor of the building were stripped out in order to create one large space. Foundations were then laid to allow supporting steel work to be installed, which runs through to the top of the building.

In addition, preparation work was made to demolish a single storey complex at the rear of the building, whilst the former Cafe Rendezvous was converted into a site office for Muirfield Contracts.

The project is being part-funded by the Scottish Government, with the remainder of the £2.3 million funding sourced from private borrowing. 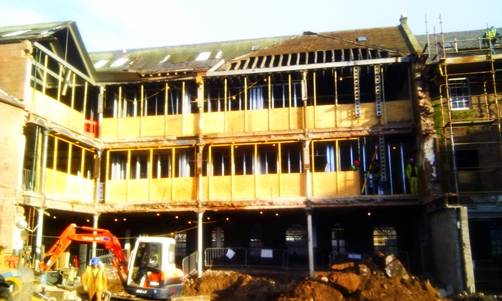 “This investment enables us not only to meet housing needs but also to ensure a much loved building in Arbroath is given a new lease of life.

“Without the funding, 20 people would not have access to a new home and we would not have been able to invest new monies in the local economy and provide new housing outcomes.”

The Arbroath Herald took over the Brothock Mill building in 1936, moving at that time from much smaller premises on Brothock Bridge. Part of the ground floor of the building was given over to storage, the printing presses and dispatch department were located on the first floor and the second floor housed the typesetting department, compositors and ancillary departments.

The building was vacated by the newspaper in January 2008 when staff moved to 21 Market Place and has lain unused until now.