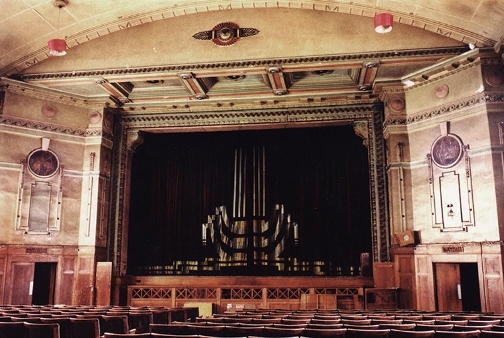 Phase One of a £5.8 million project to restore Newbridge Memorial Hall and Institute has reached completion.

The two-phase scheme is being overseen by the Trustees of Celynen Collieries and is being supported by Caerphilly County Borough Council. The project is being funded by the European Regional Development Fund through the Welsh Government, Welsh Government’s Targeted Match Fund, the Heritage Lottery Fund, Big Lottery, CADW, Trustees of the Institute and Memo and the Coalfields Regeneration Trust, amongst others.

Howard Stone, Chair of Trustees for The Trustees of Celynen Collieries, said:

“The project involves the two buildings, the Institute and the Memo. The Institute was built in 1907, whilst the Memo was constructed in 1924.

“Newbridge Institute was built by miners with the mortgage raised and repayments made by all of the miners across the two collieries. The Institute originally included a billiards room, a well stocked library, a reading room and committee room.

“The Memo was built after the First World War and was constructed to commemorate the young soldiers who didn’t return from the war. The Memo included a ballroom and a 700-seat cinema.

“In 2003 the Institute and the Memo were closed down with the threat of being demolished. At this time a public meeting was called and the general consensus was to restore the buildings and bring them back into public use.

“The buildings have been an integral part of both Newbridge and the South East Valleys since their creation, so all efforts are being made to restore them back to their former glory.”

Seddon Construction was the main contractor on Phase One of the project, working from a design provided by Alwyn Jones Architects.

“This is a building which had played a central part in the history of Newbridge and that’s been reflected in the dedicated and long community campaign which has brought about its restoration. The entire construction team is delighted to help reinstate the Institute and ensure that this cherished local landmark is back at the very heart of the community which originally built it.”

Following the successful completion of Phase One, The Institute opened its doors on 6th June.

“I remember these buildings from when I was a child and they have always been buildings of some note within the area. Many high profile people have played at the buildings, from Ivor Novello’s mother and the Joe Loss Orchestra to Tom Jones.

“The Manic Street Preachers – which includes James Dean Bradfield and Nicky Wire – are patrons, as are Gryth Rhys Jones and Lord Don Touhig, so it is quite easy to see the significance of this restoration project.

“Most of us met our partners or had our wedding parties at these buildings, so this project has certainly struck a chord with families in the local area.”

“We are delighted to be working so closely alongside the Trustees to bring about the wonderful transformation of this historic venue. A small group of dedicated volunteers have been instrumental in driving this long-awaited regeneration programme forward, and I greatly look forward to seeing the completion of these landmark buildings.”