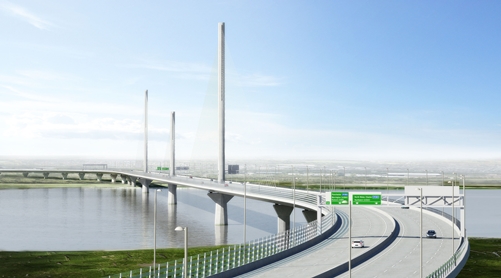 Merseylink has been announced as the preferred bidder for the Mersey Gateway Project by Halton Borough Council.

Merseylink and the council team will work on the final details of the plans before reaching financial close, signing a contract and starting site clearance and demolition later this year.

The Merseylink plans retain the iconic three-tower design, associated with the Mersey Gateway Project, but have developed the construction methods. The Merseylink design for the main bridge is based on a reinforced concrete deck, which is a change from the reference design, based on steel fabrication.

The centrepiece of the Mersey Gateway Project is a new six-lane toll bridge over the River Mersey. The existing Silver Jubilee Bridge will also be tolled as part of the project, which will bring major estimated economic, transport and social benefits to the region.

“This is hugely important for Halton and the north west of England. This partnership with Merseylink will deliver Mersey Gateway for the next 30 years and it is very exciting to be part of something that will bring thousands of jobs and major regeneration opportunities to the region for years to come.

“I am thrilled that we have found a solution that keeps the iconic design, but also produces significant financial savings for the council and the Government. Our savings will be ploughed back into the project to reduce the impact of tolls on local residents and support public transport options.”

“This is great news for the team and we are looking forward to working in a long term partnership with Halton Borough Council to deliver this much-needed new bridge, which will see benefits to the local area in terms of jobs, transport and regeneration potential. Our consortium has a wealth of experience of major projects across the globe and we are confident that we have the capability to deliver the Mersey Gateway Bridge to schedule and budget, with the least possible disruption to the local community.”