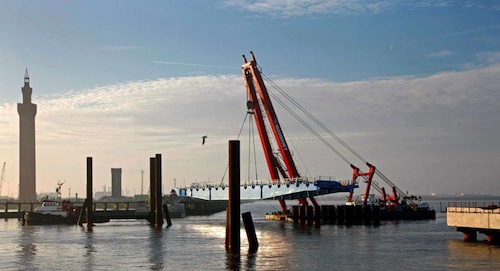 A £26 million project to provide the Port of Grimsby with a new river terminal has reached another milestone.

Following the successful delivery of a specially designed linkspan bridge in January 2013, Associated British Ports’ (ABP) Grimsby River Terminal development has now seen the arrival of a new pontoon. The large, concrete floating pontoon – designed by GRAHAM Construction – was towed from the River Tyne to the Port of Grimsby, taking approximately 40 hours and covering 123 nautical miles.

Measuring 80 meters in length, 30 meters in width and 5.6 meters in depth, the new pontoon is larger than four Olympic sized swimming pools and at just over 7,000 tonnes the pontoon weighs as much as Tyne Bridge.

“GRAHAM’s and ABP’s engineering staff have worked closely to ensure the completed works are in line with our requirements and the delivery of the pontoon further reinforces the strong working relationship we have developed throughout the construction phase.

“The collaborative approach of both engineering teams has ensured construction efficiencies have been met, and we are on course to provide a riverside berthing facility which meets – and hopefully exceeds – the high standards of our customers.”

Towed by SMS Englishman, the new pontoon left Newcastle on 20th May 2013 and arrived in Humber two days later. Approximately 2,600m³ of concrete was used to construct the pontoon, which included 800 meters of specialised self-compacting concrete, providing a better resistance to corrosion.

Locally sourced material was used on the pontoon and this increased trade to more than 20 local suppliers. The choice of materials is also more environmentally friendly as it contains a smaller carbon footprint.

The installation of the new pontoon followed the successful delivery of a specially designed linkspan bridge, which was installed in January 2013. The linkspan was delivered to the Port of Grimsby for installation by heavy lifting experts Mammoet, using the crane barge Mammoet Amsterdam.

“It was great to see the development of the Port of Grimsby take shape with the addition of the new linkspan.” 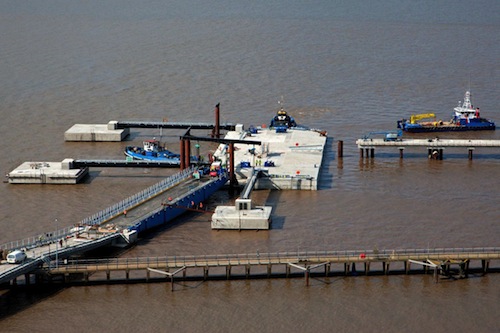 “The installation of this landmark structure marked a significant milestone in the delivery of the project. We now look forward to completing the new River Terminal and changing the landscape and port facilities on the Humber Estuary.”

The Grimsby River Terminal project was announced on 28th November 2011. Work commenced on the scheme in May 2012 and once complete the terminal will be able to accommodate vessels carrying in excess of 3,000 vehicles.

The work on the project comprises the construction of a 250 meter approach jetty; the installation of a floating pontoon and linkspan bridge; and the provision of berthing and mooring dolphins to include dredge pockets. Additional work on the project includes the construction of associated port pavements, as well as the installation of drainage, services, area lighting and fencing.

Structural steel work specialists, Donyal Engineering Ltd, built the restraint arm which anchors the pontoon back to land. The restraint arm was constructed using a mix of steel tubes and plates and holds the 7,000 ton pontoon in place.

“We won the order for this aspect of the project based on the way in which we redesigned the arm.”

“Our involvement with the Grimsby River Terminal project was very important to us as it was a major focus of our attention for the latter half of last year. This was a large engineering feat for us however we have completed big projects in the past so it was something which we were able to tackle without any problems.”

The Grimsby River Terminal project is being delivered by GRAHAM Construction, a privately owned company operating in the construction, asset management, property investment and development sectors. With a proud heritage where traditional skills and values are combined with professional management, the company has grown to have a turnover of approximately £325 million and employs over 1,300 people.

Operating throughout the UK and Ireland, GRAHAM is a leading player in all areas of construction with regional offices in England, Scotland, the Republic of Ireland and Northern Ireland. As a forward thinking company, GRAHAM prides itself on the positive and personal relationships that it develops with all its clients and subcontractors.

The Port of Grimsby and Immingham is the UK’s busiest car import facility, handing 380,000 vehicles each year. ABP’s planning application to develop the two-berth terminal was submitted on 6th April 2011, with the first vessels berthing at the terminal – on either side of the Finger Pier – in July 2013.

“The new terminal is on course to secure Grimsby’s position as the UK’s leading car import facility.”

“Our welders worked on the Grimsby River Terminal project for approximately a year, welding the structural steelwork which supported the link span bridge along with the restraint and mini dolphins, tubular piles and fender jacket connections. All the welding was NDT tested.”

“This was a good job for us to be involved with. Our welders were heavily involved with the site for a lengthy period of time and we were pleased to be a part of such an important project.”

“This is a very prestigious project and we valued our involvement. There was a great deal of calculation and engineering work involved, making it quite a complex job, something we pride ourselves in offering as a UK based engineering company.”

ABP owns and operates 21 ports in England, Scotland and Wales, from Barrow and Barry to Teignmouth and Troon. ABP’s 21 ports, together with additional transport related businesses which make up the ABP group, form a UK wide network capable of handling every conceivable type of cargo.

ABP is backed by investment in modern facilities and equipment, and is supported by experienced staff. ABP’s £26 million investment in the Grimsby River Terminal is the largest ever in the Port of Grimsby.