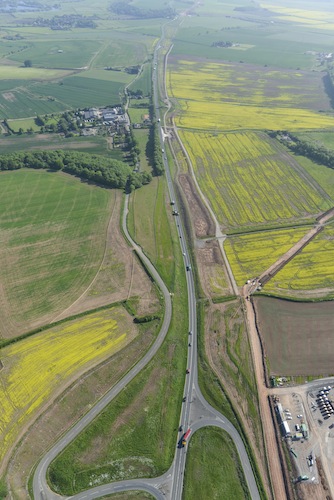 A project to improve the A453 from Junction 24 of the M1 through to the A52 Nottingham continues to make great progress.

The project comprises the widening and improvement of existing carriageway, in order to provide motor users with a safer and more efficient route. Laing O’Rourke is the main contractor on the project, whilst White Young Green is the designer on the scheme.

Work began on the A453 Widening project in January 2013 and is currently scheduled to reach completion in early summer 2015. To date the project remains on programme and continues to make great progress.

Five months into the project, Premier Construction caught up with Highways Agency Project Manager, Jonathon Pizzey, in order to get an update on the project’s progress.

“Work is being undertaken on the project for a number of reasons. Firstly the road has poor alignment, so the new carriageway will ensure that it is a safer road to travel along and secondly the A453 is a very busy route which suffers considerably from congestion.”

“The two different aspects of the project are being broken down into three distinct phases. The first phase runs from the M1 to Ratcliffe Power Station and will see new carriageway added to the existing route. There are ten major structures along the route including rivers and railway, so this phase has a few challenges.

“The next phase is much more simplistic and takes the route from the opposite side of Ratcliffe Power Station through to Clifton. This area of track is predominantly off-line, so Laing O’Rourke can construct the new road alongside the existing carriage without any major problems or disruptions.

“The third phase, which is the most complex, is the construction of the single carriageways on an area where there is very limited space. The contractors will have to do a great deal of shuffling around to complete this section.”

Public exhibitions about the works were held at Clifton Leisure Centre on the 11th and 12th of January 2013 and at the Kegworth Whitehouse Hotel on January 13th. Advance works were undertaken ahead of the main construction works and included archaeology and ecology works, the installation of fencing and some site clearance.

With work on the scheme ongoing until 2015, reduced speed limits have been put into place between Junction 24 of the M1 and the edge of Clifton. A Traffic Management Plan has also been developed in consultation with the local police and is currently in place.

“Getting a scheme like this off the ground is very rewarding. At the Highways Agency we spend a great deal of time in preparation and development, so it is great to see a scheme being built.

“I started on this project back in 2009 when we took it through a public enquiry, but unfortunately it was placed on hold in 2010, before it was finally restarted in 2011. This gave us a year to get everything organised before getting on site. These projects certainly aren’t short schemes, they can really take some time to come to fruition, so finally seeing this one underway gives me an enormous sense of satisfaction.”

For more information about the Highways Agency, or to keep track of the progress of the A453 Widening project, please visit: www.highways.gov.uk.