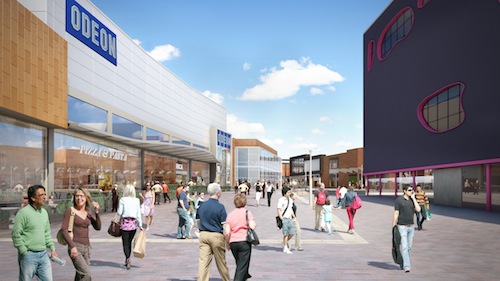 A £3 million project to fit-out a new ODEON Cinema in  has reached completion.

The new cinema is part of a £200 million scheme, currently taking place in the town, which will see the creation of New Square, a fantastic shopping and leisure development. The scheme is one of the biggest renovations in the UK this year and once complete will see a number of restaurants and high-end retailers join the site.

The five-screen cinema fit-out, which got underway on the 1st March 2013, is one of the first to open from the £200million development of New Square development. New Square is anchored by a large Tesco Extra store for the 540,000sq ft development and the ODEON Cinema is just one of many developments set to appear once work is completed.

Peter Alderman, Project Manager for the new ODEON Cinema, explained his contribution towards the £200million development:

“I have worked for ODEON for approximately 13 years. When you start looking at cinemas compared to other leisure facilities, the sheer scale of the businesses, the degree of height you have to deal with and the amount of space in particular, you can see many more challenges than when working on other retail stores.

“The main materials used for the fit-out was fly wood, plaster board, a metal studding system, electrical cables and we included a ventilation system. The last element to be installed into the cinema is the film sheet which takes approximately the best half of a day to install. There is a metal frame and spongy bands that go through the eyelet and the screen frame which stretches it out; the skill is to just keep adjusting it until the screen is completely flat, or in the case of IMAX the screen has to be curved which can be more complicated.”

ODEON is one of the largest cinema chains in the UK with over one hundred cinemas. Founded in 1930 by Oscar Deutsch, ODEON has had a longstanding relationship with the film industry, spending 58 years as part of The Rank Organisation before being rebranded in 1998.

Over the next few years ODEON was sold to Cinven – who merged ODEON with its existing ABC cinema chain – before selling the cinema chain to a consortium of investors in 2003. More recently private equity company Terra Firma acquired ODEON, along with United Cinema International (UCI), where the chain has continued to develop and grown under the ODEON name.

The extensive re-branding campaign has further enforced ODEON’s position as a market leader in the UK and introduced the brand’s slogan, Fanatical About Film. ODEON has been recertified with the Carbon Trust Standard for successfully measuring, managing and reducing carbon emissions across its UK cinema estate of 113 cinemas.

The new ODEON joins New Square which promises to provide modern shopping and leisure facilities for West Bromwich; creating more than 2,000 jobs; transforming West Bromwich into a visitor destination and developing an evening economy for the town. In addition, New Square will generate £200m of investment for the town.

Vinci Construction UK take projects through from inception, ground investigation and remediation, to project completion and beyond, to the delivery of operational solutions.

The New Square development is currently scheduled to open in autumn 2013. Leading retailers Next, Arcadia, JD Sports, Bank, Deichmann, Phones 4 U, Nandos, Prezzo and Harvester are all set to join Odeon when the development opens.

“The development as a whole is driven by Tesco, there is also around half a dozen restaurant offers that are next to go into the development. It is a big opportunity for Bromwich”