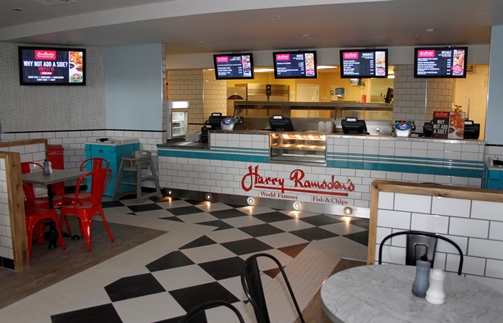 Whether a weekend indulgence or a seaside treat, fish and chips has been Britain’s guilty pleasure for well over a century.

The dish first became popular in the 19th century with the rapid growth of trawl fishing and the ability to transport stock quickly from ports to cities through a developing rail network.

Nowadays no town in the UK is complete without a ‘chippy’ and perhaps the most widely recognised and trusted vendor is Harry Ramsden’s.

Founded in 1928 in Guiseley, West Yorkshire Harry Ramsden’s began trading from a small wooden hut beside a tram stop. The little chip shop quickly became famed for its quality and within a few years a sit-down restaurant was opened on the same site.

85 years on there are now 30 outlets throughout the UK and Ireland and venues internationally in Hong Kong, Saudi Arabia, Australia and America.

Owned by Ranjit Boparan since 2010, the company has been undergoing a major revamp in recent years, with a renewed focus on branding and major investment in restaurant refurbishment.

CEO of Harry Ramsden’s Jo Texiera was recruited to the company in 2011 following on from his impressive development of John Lewis’ food services. “It’s about repositioning the brand and taking it back to its heyday, whilst at the same time modernising”, says Jo.

“The last 12 months has been about getting the product right and I am confident we have done that. We have got a strategy in place were we are going to expand through the franchise network. There are ten and a half thousand fish and chips shops in the UK and we want ten percent of the market eventually.”

“We have also entered into a deal with Birdseye where they produce fish and chips for Harry Ramsden’s that sells in all the major retailers. The brand is so powerful that from a standing start we are selling over £25 million in the first nine months.”

In addition to a major retail drive the company has also been investing in its restaurants. Bournemouth has received a one million pound refurbishment, creating a Harry Ramsden’s that takes the best from its past but also offers a modern dining environment.

Over two phases, the development began last year with the ground floor being refurbished and was completed in June with external building receiving a makeover. At 450 covers the restaurant is the largest fish and chip shop in the world

“Our Bournemouth restaurant is in one of the best locations in the UK and after the refurbishment we now have a unit that we can be proud of and that customers love.”

Catering Design Services were the main contractors on the development and Simon Ellis was the architect.