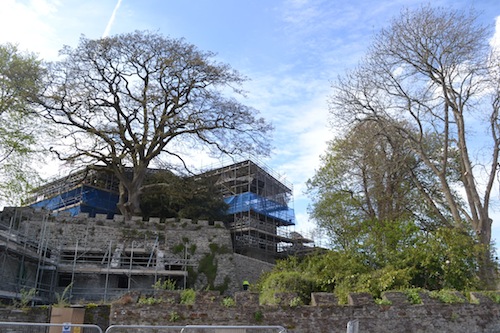 Work on the 12th Century castle is now underway following a 14-year campaign to save the site. The project will see the castle re-established as a focus for the community, with a heritage centre and an open air concert space included.

Expert construction and civil engineering contractor Andrew Scott Ltd is the main contractor on the restoration project. Andrew Scott Ltd has been delivering innovative projects for more than 140 years, working across the commercial, education, health, retail and leisure sectors through to industrial, nuclear & power and conservation sectors.

Work began on the project with a turf-cutting ceremony, followed by the removal of steel beams which have held up walls at the site since 1975. The scheme is being funding through a number of organisations, including Heritage Lottery Fund, CADW, Welsh Assembly Government, Ceredigion County Council, European Regional Development Fund and the lottery.

During the restoration of Cardigan Castle, walls, buildings and gardens are being restored and a new restaurant and luxury accommodation will be installed. Once work is complete on the project Cardigan Castle will boast a number of educational facilities, including cultural, crafts and horticultural information for the Welsh language.

The main aim of the project is to increase visitor numbers to the castle, taking numbers from 3,000 to 30,000 a year. Work is currently on schedule and due to reach completion in 2014. 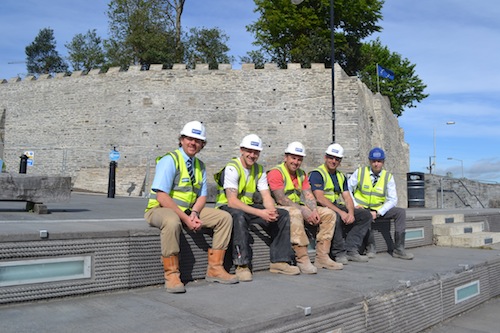 “The whole site is being redone, putting back the regency gardens and the house.

“I’m so excited – I really am. This is something that the Trust has been working for. I’ve been involved with it for 13 years. This is what we have all been waiting for.”

“It is a very big project and hopefully it is going to bring a lot of input into Ceredigion and north Pembrokeshire. This is going to be a big tourist attraction as well as being a heritage one.”

“This is an exciting and interesting project for us to be involved in. The passion of the local community has been truly amazing and we can see that they are excited as us to see the Castle back to its former glory along with the new facilities that it will have to offer.”

Cardigan Castle is considered to be the first stone castle built by the Welsh princes and was home to Rhys ap Gruffydd, prince of the medieval kingdom of Deheubarth. The castle has had an interesting history, having hosted Wales’ first Eisteddfod, however more recently it has stood in a derelict state.

In 2006, Prince Charles gave the restoration project his full backing when he visited the site.