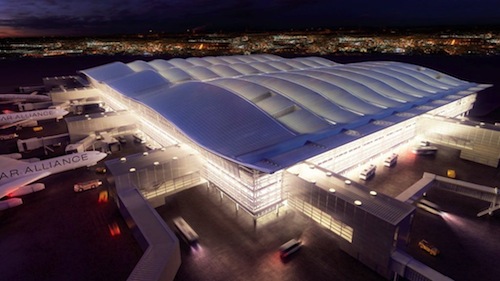 Phase One of the £2.5 billion programme to transform Terminal 2 at Heathrow Airport is progressing on budget and on schedule.

“We are on target to deliver the T2A and T2B developments by November 19th”, says Steve Livingstone, T2 Development Director. “Once we have completed the structural work we will begin our operational readiness trials and familiarization trials ahead of our first aircraft on June 4th 2014.”

Speaking about the trials, Steve said: “We’ll have volunteers from the general public, airport staff and baggage handlers all working the systems and getting used to the new processes. The idea is to get everything trialled thoroughly, we can never guarantee things will be perfect on the day but what we can do is to make sure that we have trialled and tested and trialled and tested again.” 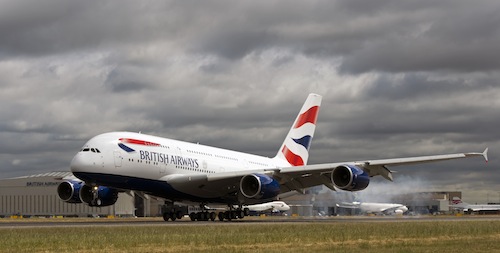 “Building in the centre of a fully operationally airport is obviously a challenge”, Steve added. “It is one of the most challenging construction projects in Europe, we have had to demolish the old Terminal 2 and control tower, installed new underground infrastructure and changed the layout; to do all that whilst not affecting passengers or flights on a daily basis is extremely challenging.”

The construction of Terminal 2 has been funded entirely by Heathrow Airport, making it the largest privately funded construction project in the UK.

Phase One of the Terminal 2 project includes the construction of a brand new main terminal building, a new satellite pier and a new energy centre. A new cooling station will also be constructed, along with new baggage and control systems. Check-in desks will be expanded in order to accommodate 3,000 passengers per hour, whilst up to 60 self-service kiosks will be installed to improve efficiency at the airport. 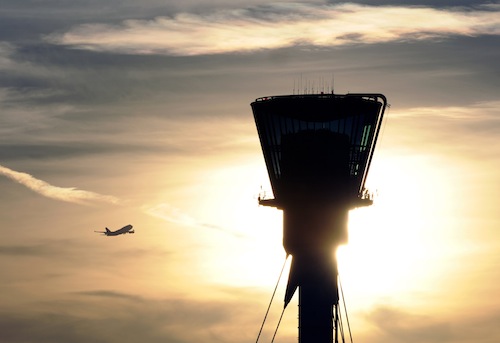 Additional changes are being made to the road systems around the airport. A brand new multi-storey car park – with a simplified road system and ramps – will also be built to accommodate up to 1,300 vehicles.

In order to allow planes to move more efficiently throughout the airport’s runways, 28 fully serviced aircraft stands will also be installed. The new aircraft stands will help to reduce ground level emissions, improve air quality and supply the aircrafts with electricity and preconditioned air.

Phase One of Terminal 2 comprises a total of nineteen individual projects that are all being implemented concurrently to make the terminal fully operational by 2014.

“The new Terminal 2 has been designed around the needs of our passengers, to allow them to get to and from their flights as quickly as possible. Like Terminal 5, it will promise world class customer service and a warm welcome to Britain, which visitors expect from the UK’s hub airport. 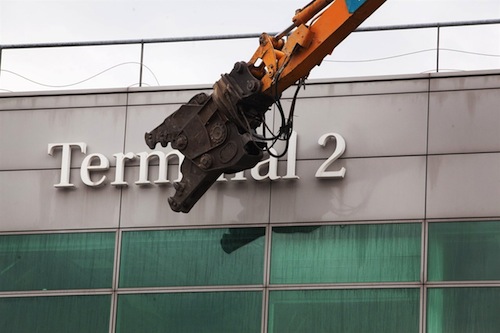 This next step in Heathrow’s transformation will deliver a better journey for passengers, a more efficient and reliable infrastructure for airlines and additional jobs, trade and economic growth for the UK.”

The original Terminal 2 building officially opened its doors on April 1, 1955. When it opened the terminal was known as Europa Building, however the facility underwent a name change in 1966 following the opening of Terminal 1.

For more than 50 years Terminal 2 saw an impressive array of celebrities – including Marilyn Monroe and The Beatles – pass through its arrival lounge. However, after 54 years of service Terminal 2 officially closed to passengers in 2009 and in 2010 the building was demolished to make way for the new terminal.

The main terminal will be fully glazed and has been designed to match the design of all of the existing terminals at the airport. 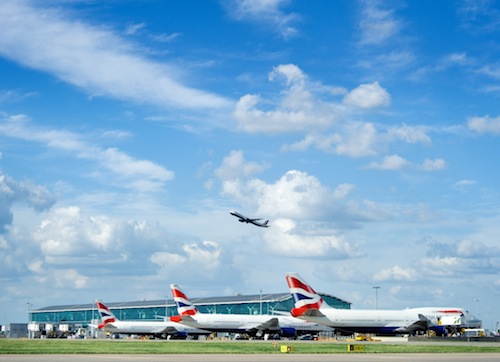 Several environmentally friendly practices have been implemented throughout the construction of Terminal 2 in order to ensure that the project makes use of as many sustainable materials as possible. Over 95% of the original terminal is being recycled, whilst the extensive glazing in the main terminal building will help to reduce energy usage through the inclusion of solar control glass and angled louvres.

Additional features include 1000 square metres of photovoltaic (PV) panels on the building’s canopy and the installation of a sophisticated lighting system that will reduce energy consumption by switching off lights when they are not in use.

A 12MW biomass boiler heater will also be installed in the energy centre in order to provide hot water for the building. The boiler will be powered using FSC approved timber and once Phase One of Terminal 2 is complete, the building will save around 13,000 tonnes of CO2 a year. Additional schemes to increase the levels of recycling in the main terminal building will be put into place once the building opens.

The steel work for Terminal 2 is being manufactured by Watson’s Steel Structures Limited at their factories in Thirsk and Bolton, whilst mechanical and electrical modules are being developed by CHt Manufacturing in Wolverhampton. Meanwhile, major structural components – including bridge beams – will be precast at Laing O’Rourke’s Explore Industrial Park in Steetley. 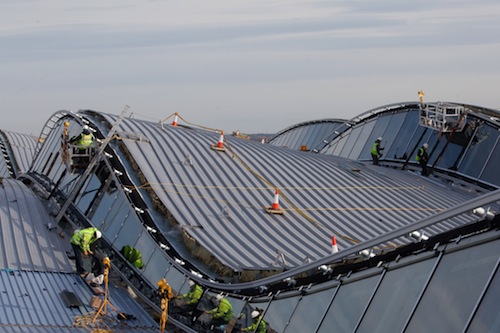 All completed materials are transported to the site to be installed where required.

Throughout the life of the project it is estimated that up to 35,000 people will be involved in the Terminal 2 project.

“Opening Terminal 2 next year is one of many steps we are taking to make every journey better for our passengers at Heathrow. The markets that are growing most quickly are those that are furthest away. We are in an international race for connectivity to emerging markets. Continuing to invest in our only global hub is the best way to stay ahead.”

Once work is completed Terminal 2 will become the home of the Star Alliance group of airlines. For the first time all 23 Star Alliance airlines will operate from one terminal, which will also help to improve the airport’s environmental performance by reducing the amount of transfers across the airport. Aer Lingus, Virgin Atlantic Little Red and germanwings will also operate from the new terminal.

“The Star Alliance member carriers are looking forward to moving into our new home here at Terminal 2, Heathrow. Being located under one roof will enable our airlines to deliver seamless alliance travel to our passengers, further enhancing the current airport customer experience.

“Star Alliance is the world’s leading airline network. The Alliance’s 27 airlines operate over 4000 aircraft, offering more than 21,000 daily flights to 1,290 destinations and carrying over 600 million passengers a year.

“The redevelopment of Terminal 2 will reinforce Heathrow’s position as one of the leading global aviation hubs. From our new home at Heathrow, Star Alliance will be able to compete on an equal footing in the alliance arena, something we have been waiting for ever since the opening of Terminal 5 (in 2008).” 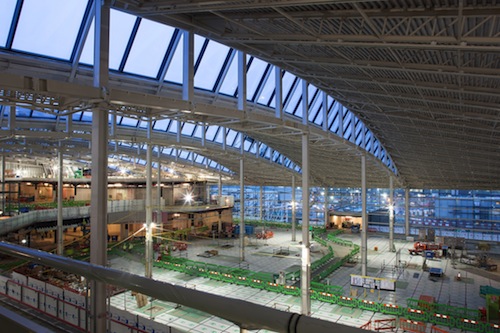 Following the completion of Phase One of Terminal 2, a second phase will extend facilities northwards onto the existing Terminal 1 site. Phase Two will largely concentrate on increasing the airport’s capacity to 30 million passengers and will also include the construction of a second satellite building.

A start date for Phase Two is currently unscheduled, however once Phase Two is complete Terminal 1 will officially close to the public.

Since 2003 Heathrow has invested £11bn of private sector investment to improve Heathrow. The proportion of passengers rating their experience as very good or excellent has increased from less than 40% to more than three-quarters. In June it was named the best large airport in Europe, while passengers have voted Terminal 5 the ‘world’s best terminal’ for two years running. Phase One of Terminal 2 is scheduled for completion in 2013 and the terminal will reopen to passengers on 4 June 2014.

For the past two and a half years Deborah Services Limited has been providing, almost exclusively, scaffolding and temporary works at the construction of Heathrow’s new Terminal T2A.

DSL Project Manager, Peter Baverstock said: “At the peak of our work we have had over sixty scaffolding operatives on site. This of course requires the logistics to keep the workforce supplied with material to be delivered in a timely manner to enable us to carry out the works to the very tight programme constraints, this function has been carried out by our contracts operation in Birmingham.

“Our work here has been varied and challenging”, adds Peter. “It ranges from complex design structures to support heavy loads including MEWPS, structures over escalators and in lift shafts, large loading gantries, all of which require design and engineering input from the DSL team. Through to small towers for access to carry out fire stopping works and install ducting and mechanical/ electrical equipment, to safety handrails to protect open areas and voids in floor slabs, sometimes having over nine hundred structures erected at any one time.

“DSL are also responsible for the weekly inspecting and tagging of all scaffolding structures and have had two full time inspectors on site.

“All of the work is of course carried out to the exacting safety and organisational standards set by both BAA as client and the Joint Venture team constructing the building”.