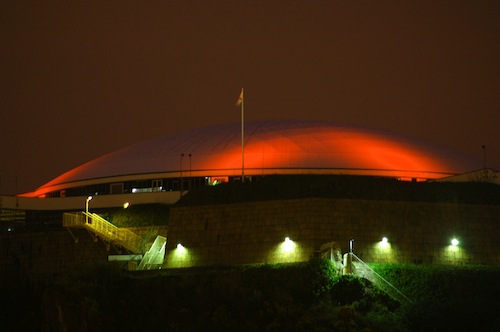 The roof of Jersey’s main leisure centre and former military fortress, Fort Regent is to be protected.

In the run-up to the Architecture Week 2013, which had a particular focus on Fort Regent this year, the Minister for Planning and Environment announced that he intended to list the Fort’s modern roof structure. The late Georgian fort is already a listed building but this designation currently excludes the iconic waved roof structure, completed in 1974, which caps the Fort’s parade ground.

Deputy Rob Duhamel proposes to change this by signalling his intent to add this structure to the list.

“Part of my ongoing review of the historic environment includes, for the first time, a comprehensive assessment of the island’s post-war buildings and structures.

“The roof of Fort Regent is a modern architectural structure which we are all familiar with and it is, perhaps, taken somewhat for granted. It is a key feature of the St Helier skyline and it was an ambitious and ingenious solution to the challenge of covering the parade ground when it was developed. It is a worthy addition to the list because of its architectural and scientific interest.”

The 19th Century Fort Regent building was originally built to protect from the Napoleonic French invasion. The ‘wavy’ roof was added much later and was built over the fort’s parade, in order to enclose it for public use. 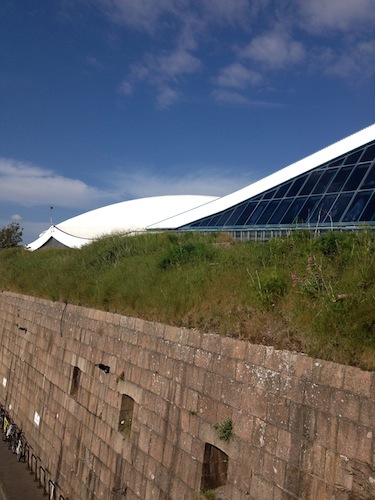 When the roof was constructed it was the largest of its type in Western Europe and was deemed a technological feat. Such was the success of the project that in 1987 the building appeared on a series of stamps featuring modern architecture.

Described by a specialist lining inspector in 2000 as an ‘extraordinary structure… of natural importance’, the irregular shaped, wavy roof comprises white corrugated metal sheeting, with areas of patent glazing to the north and south. The roof sits comfortably on top of the fort parade, which itself is divided into three major sections: two open areas with undulating roof at the narrow ends and a central rotunda hall with domed roof between.

The roof is supported on free-standing columns, which were designed by British Steel and consulting engineers Messrs. Edwards & Blackie.

The roof includes portal frames of varying span, which run from east to west, support curved lattice beams which carry a tent-like roof of corrugated steel decking. The stanchions of the portal frames are triangular, rising from a point at ground level to a wide haunch.

The ceiling includes a checkerboard design of white panels, which are fixed to the underside of the decking. The dome of the roof measures 51 meters clear span, whilst the dome is 6.7 meters and includes 36 vertical braced cantilever frames positioned around the rotunda perimeter.