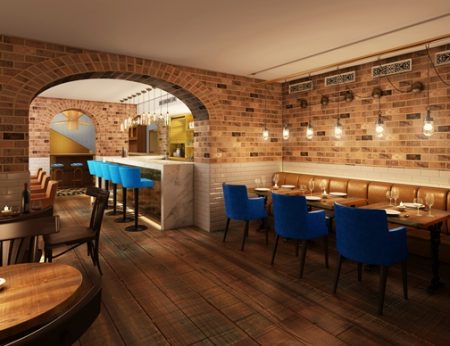 Located within a Victorian building in South Kensington, Ampersand Hotel is a new five-star boutique hotel.

The six-storey building comprises 111 bedrooms, the drawing rooms patisserie and lounge, Apero restaurant and bar, the library, a private dining room, two meeting and events spaces and a gym. The restaurant/bar, meeting rooms and gym are located on the lower ground floor, whilst the drawing rooms, lobby and bedrooms occupy the five remaining floors of the building.

Work began onsite in October 2011 and involved the conversion of the former Grosvenor Hotel into the luxurious new Ampersand hotel. Due to the historic significance of the building, many of the site’s original features were retained – including the stunning ceilings – whilst replacements and modifications were conducted in keeping with the original design scheme. The original staircase was also restored and extended, whilst a new entrance was installed in order to provide street access to the restaurant.

John Sisk and Son was the main contractor on the project, Dexter Moren Associates was the architect, Bradbrooks were the project managers and BSDA were the mechanical consultants. Goosebumps was responsible for all of the branding on the hotel.

The Ampersand Hotel includes an impressive range of guest bedrooms from double and superior rooms to deluxe studios with free standing baths and suites with balconies.

All of the bedroom furniture within the hotel has been individually designed by Dexter Moren Associates. The furniture and decor has been inspired by many of the landmark buildings located within the surrounding area, including the Victoria and Albert Museum and the Royal Albert Hall. 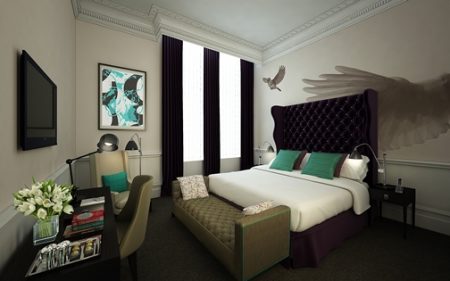 Each of the rooms has its own unique design concept ranging from music, botany and astronomy to geometry and ornithology. In addition, all rooms include complimentary Wi-Fi, tea/coffee making facilities, a mini-bar, a media hub, laptop safe, air-conditioning and LCD TVs with movies on demand.

“The key was to be involved as early as possible to avoid any unnecessary and costly last-minute changes.

“The furniture and finishes are all new, and the mechanical and electrical services have been replaced and updated to suit the modern requirements of our guests. All of the work that we have conducted has been implemented with great respect to the original building’s design.” 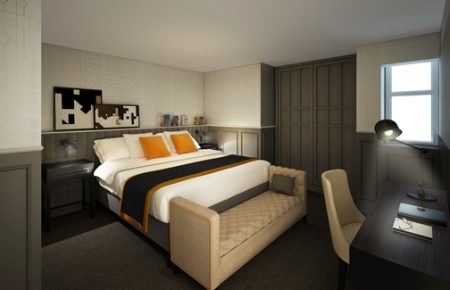 “There are a number of independent and boutique hotels in the surrounding area, but in terms of design the Ampersand Hotel is very different. We have linked ourselves directly to the local area – specifically to South Kensington – and we are very much about providing a place that is reflective of the space that we inhabit.

“Ampersand bridges the gap between the very small boutique hotels and some of the much larger hotels. There is a market out there which is very much music and fashion led, and that’s exactly what we are all about.”

Ampersand has been nominated for an award in the Conversion and/or Extension of an Existing Hotel Building category at the European Hotel Design Awards 2013.