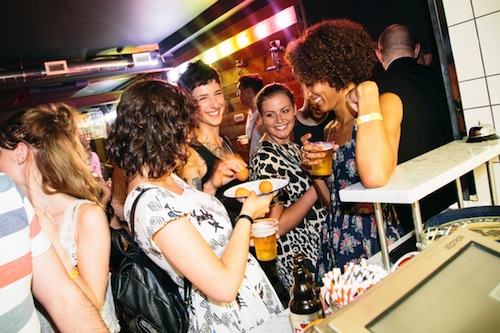 It all started when Florian Frey and Azadeh Falakshahi moved from the Black Forest to Brighton in 2005.

They both grew up in this hilly region of south-west Germany and having settled on the British sea-side they started missing the traditional sausages they could get on every street corner at home.

“The English sausages on offer were not really up to the standard of a German sausage that we were used to”, says Azadeh. “We started bringing lots of German products back to Brighton and cooking them with friends, that’s how it all started really.”

Azadeh studied Photography and Florian was a hairdresser but their passion for food and love of German produce inspired them to set up a little business selling imported sausages from their local butcher back home at their local pub in Brighton.

Realising how popular they were Azadeh and Florian bought two trailers and started selling at local music festivals, food festivals and car shows- and this is how in the summer of 2008 Herman ze German was born!

“After the success of the festivals, we opened our first shop on Villiers Street in London in 2010 and it has been a roaring success ever since. It combines the festival spirit with quirky details and a good dose of humour”, says Azadeh.

In August this year the sausage aficionados opened their second venue in Soho to a critical fanfare. 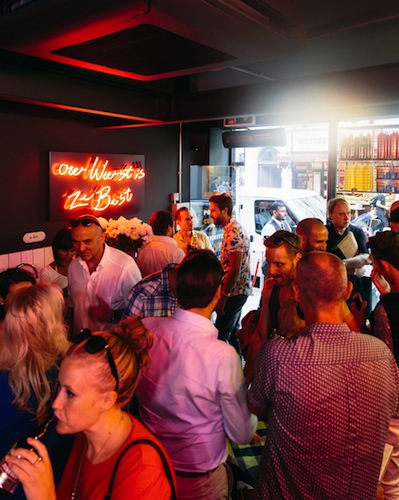 “The feedback has been amazing since we opened. The venue in Soho is very different to our first shop; this site is much more mature. We have a lot more seating and space, it is filled with artwork and there is just a lot of atmosphere about it.”

Azadeh added: “I did all the design in collaboration with a friend in Copenhagen who is an interior designer. I sourced all the materials from antique and vintage shops; the end result is great, it really fits in with the Soho area.

“What I like about Herman is that it came about not out of a business idea, we just missed our sausages and wanted to introduce our friends to them.”

Herman ze German import their sausages from a small producer in Germany from the village near the Black Forest. All the meat is fresh from the farm and free range, ensuring the best quality sausage. All the sausages are gluten free and free-range, these meaty treats are an award-winning delight! 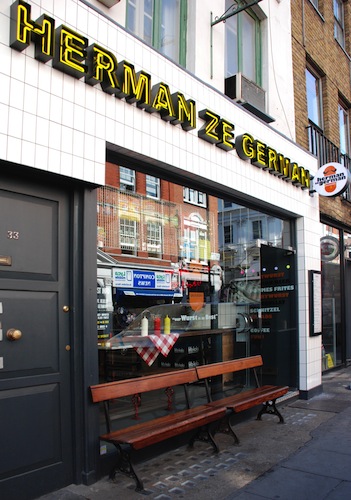 Why not try a bouncy bockwurst (smoked pork sausage) layered with ‘curry’ sauce (spicy ketchup, preposterously popular in das Mutterland), squidgy fries and crisp onion shards. And with mouthwatering prices there is no excuse not to wrap your lips around one of Herman’s hotdogs.