Ron Brooks, a Toyota dealer group, is set to reopen their newly extended and refurbished Mansfield site at the end of October.

The Ron Brooks team evaluated their ten year plan and recognised the brand was only going to get bigger and therefore decided the time to invest money in the site was now.

The extension of the site will see the car showroom and servicing workshop almost double in size, with two new modern automated MOT Testing lanes for class IV and VII cars and light commercial vehicles. The car dealership has been operating on the site for ten years now and currently has 37 staff members operating on site.

Due to the extension and refurbishment six new staff are estimated to be hired to work at the new and improved centre. The showroom extension will allow the firm to display 14 cars internally, ensuring customers have a more enhanced shopping experience.

The facilities inside the showroom have been finished to extremely high standards to improve the retail experience. A new reception area has been erected alongside an impressive coffee shop and lounge where customers can relax and wait whilst their cars are being serviced.

The coffee shop hosts laptop installation and free Wi-Fi areas so customers can work online whilst they wait. Interactive television screens have also been placed throughout the showroom to remind customers of the services Ron Brooks and Toyota offer.

Kevin Slack, Ron Brooks Managing Director said he is extremely pleased with the modern, high spec finish the Mansfield site has achieved. Kevin also said that Ron Brooks and Toyota are extremely serious about being eco-friendly. As a result Mansfield’s site has been developed in a similar vein.

“Ron Brooks and Toyota are extremely aware that we sell motor cars which have an impact on the environment and therefore we try very hard to mitigate that as far as we can.”

Solar panels have been installed on the roof so the dealership generates its own electricity. A rainwater recycling system has also been installed which gathers rainwater off the showroom roof in an underground system and enables the water to be reused in the sites toilets and car washing facilities. 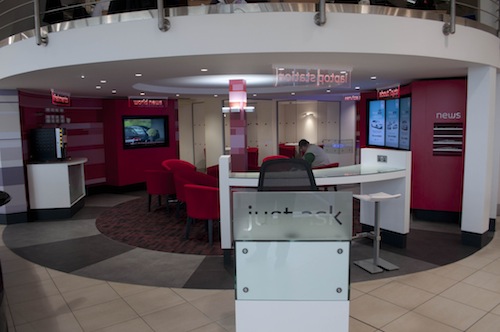 Kevin said that they have also installed a special charging unit for electric cars on site which would allow customers to charge their vehicles whilst they browse the site looking at new ones. The company are eager to implement as many modern features on the site as possible in the future and stress that environmental friendliness will be at the forefront of these developments.

R W Oxley – Architectural Services carried out all architectural and design services during the Ron Brooks development project in Mansfield. DH Harvey and Sons carried out the main construction work on site. Both companies have been instrumental to the extension of the site.

Kevin said that the dealership plans to refurbish their Ilkeston branch next year. The project will not involve construction work and so will be a smaller project than the one currently ongoing in Mansfield.

The 2014 Ilkeston branch development will see the showroom adapted via the installation of a new reception area and cafe facilities.