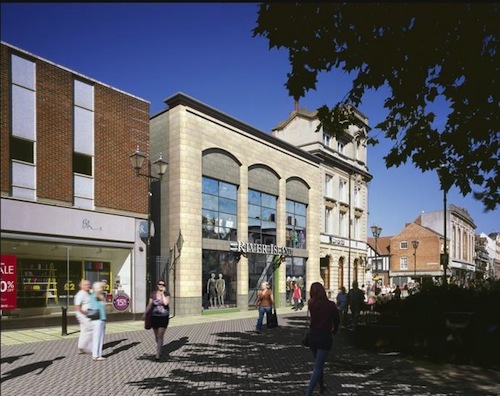 The project – which is now in its final stages – will see the new store installed at 200/201 High Street, Lincoln. Once work is complete on the project, UK Estates Wilson Peck Properties Limited will lease the store to high street retailer River Island.

Construction work began on the project in April 2013 and sees the new store replace two previous retail units, Next and Sundance Fair Trade. Lincoln-based contractor Gelder Construction is the main contractor on the project, whilst Nottingham-based practice, Maber Architects is providing all architectural services.

The building includes three floors, covering an area of 1180sq meters and comprises a steel frame with concrete floors. Air conditioning will be installed into the building, along with sprinkler systems and detection and alarm systems.

Additional features include a stair case, ceramic floor tiling and carpets. Meanwhile the exterior finish of the building is a mix of masonry blocks and stone with aluminium windows.

There is no exterior landscaping work on the project, although repairs were made to the paved roadway around the building.

Work has progressed very well on the project. Demolition of the existing building took place in 2012 and this was followed by four months of archaeological digs. During this stage of the works the remains of Medieval roads were uncovered, making for a very interesting find.

During the works, site access was very restricted with access roads only available during early mornings and late afternoons. However this did not cause any major disruptions as the work was programmed accordingly.

“We are very hopeful that this building will refocus and substantially upgrade the retail areas in this prime location. The building is a major development in the Lincoln retail area, and of a higher quality than other recent developments.”

“This is a very high profile site in Lincoln and is quite a large unit for the size of the retail environment, so it will become a big focus for the retail industry in the city.”

During the final stages of the project, the stone facade is being completed and aluminium windows are being inserted. River Island will then take over the operation of the building and store fit-out works will take place.

For more than 60 years River Island has been a leading name within the fashion retail industry, making it one of the most successful retailers on the high street. River Island has almost 300 stores throughout the UK and Ireland, as well as Asia, the Middle East and Europe.

Known for its stylish and affordable fashion lines, River Island has become a firm favourite with customers, from its amazing range of denim to its fabulous shoes and bags. Almost all of its lines are designed in-house, with new fashion ranges arriving in-store and online each week.

River Island is an ethically run company, with products manufactured across the globe. The company actively works with its suppliers and official agencies to safeguard and improve the rights and working conditions of workers in factories who supply their products. The company also has a number of international franchise opportunities throughout the Middle East, Europe and the Far East.