Challengers’ children’s charity is set to unveil a brand new play centre in Guildford in December 2013.

The team had previously been providing their invaluable services from an old modular building on their Guildford site which was first opened in the late 1970s, providing care and activities for use by children and young adults from age 3 to 25 with varying special needs.

However, with repair prices becoming unmanageable for the aging building, Challengers decided it was time for a change and they started raising money to build a safe, functional and fun space for the children and charity staff. The charity has a lot of loyal supporters that have been crucial in the fundraising process. The rest of the funds have been secured from Surrey County Council.

The £1million new build project has been designed by architects Plan A UK Ltd. Director Paul Ginever spoke to Premier Construction about his involvement in the project:

“We have been involved since October 2012, beginning with concept sketches that helped both us and Challengers to explore the options available. We have been exceptionally lucky to be appointed as the architects for the project, and the whole Challengers team has been one of my favourite clients to work with as they have thoroughly and enthusiastically engaged themselves in the design process.”

“The brief was to create a vibrant new play centre for the children and young people which is both safe and fun, whilst creating a professional office environment for the hard working administrative team, all in one space. There is also a vitally important private social space that will provide the children’s families with an area they had never previously had.

“Before this project began the children still enjoyed their play centre in the port-a-cabin, but it was aging, restrictive and compromised as so many of the administrative team and visitors had to pass through it to get to their various offices and spaces which were dispersed in various other buildings around the site.” 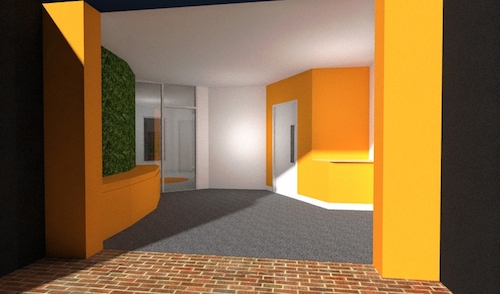 The previous building achieved an incredible amount in its 35 years, but the new building will create a larger than life play space for the children to use, including a state-of-the-art Sensory Room that incorporates motion-sensing projectors to encourage interactivity with the lights sounds and images in the room.

The space contains big sweeping curved walls which define different areas; one of which is covered in artificial grass that offers a visual and tactile experience for the children.

The open play space lets the children run around freely and is shared with an irresistibly cushioned soft-play area. There is a separate art room called the Art Bar which has been brightly decorated and is flooded with natural light.

The children also have their own kitchen where they can take part in light cooking exercise; creating tasty cookies and cakes. All of the kitchen equipment is bright and adds to the uplifting, fun environment.

The new open-plan offices for the administrative team are created within the pitched space of the roof above the play space, and also provide a separate conference room for private meetings. It will be a warm and light environment that is unlike many other offices, and with views across Stoke Park.

The building has been specially designed as it is situated next to a listed building in Guildford.

The building had to be sensitive to its context adjacent to the Listed Burchatts Farm Barn, so externally it appears similar in scale and form. The main contractors HA & DB Kitchen have constructed a timber frame for the building with lots of insulation inside so that he space is very energy efficient.

There is fibre cement cladding on the outside of the building which looks like black timber to match the listed barn. In reality it is cement so it is long-lasting. The materials chosen for the project is that everything has been picked to last a long time so the charity do not have to pay to maintain it. So things have to be robust; the walls are particularly hard wearing. The roof is concrete tiled to ensure they last longer.

The charity will be moving back into their new building on the 23rd December after seven months situated in other venues. The charity is currently operating from Urban Saints, a Christian youth organization that is next door to the site. The admin teams are in offices 50 metres down the road. 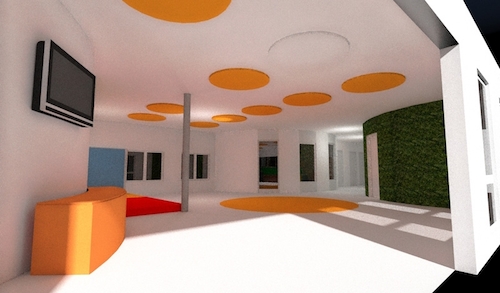 There were some complications on site due to the depth and moist nature of the ground conditions. HA & DB Kitchen handled issues and have been exceptionally well organised; remaining on time and on budget.

Project Architect Paul Ginever said the project has been immensely enjoyable to be a part of. He added:

“Seeing our designs come into reality are simultaneously thrilling and terrifying. It is amazing to see something that has taken a long period of time to design; we do not want to think we have put a wall in the wrong place.

“Challengers have been a brilliant client. This project has given them an opportunity to rethink how they want their facility to be designed whereas before they were essentially stuck with an building. It has been a fascinating process for us all.

“Crucially the new centre will allow Challengers to be around for another 50 to 100 years. People will be able to see the great work they do and it will encourage people to invest in the charity. It is rare to meet such an enthusiastic team; Challengers deserve recognition for their hard work.”