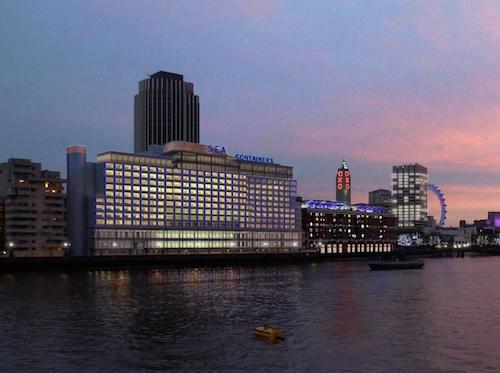 Situated near Black Friars Bridge the project involved the restoration of a former office block and the erection of a new building. The site has now been transformed into a mixed use project that includes Class A office and a stunning hotel offering breathtaking views of the Thames.

The project also includes the creation of new restaurants and cafes along the frontage to the River Walk as well as the high quality hotel, predominantly within the south wing, operated by Morgan Hotels Group.

Sea Containers House was originally built in the 1960’s as a hotel, but prior to opening the market changed and the previous owners converted it to office space. Premier Construction caught up with the Vice President of Development for Morgan Hotel Group, Michael French, to find out more about the development.

“Work began on site at the end of 2011; upon completion the venue will hold 359 rooms, a ground floor restaurant and two bars which both offer stunning views of the River Thames. The roof bar boasts impressive views of the entire city; its design allows it to be an all-year-round venue.

“It is always challenging to begin development on a pre-existing structure and be unsure of what is going to be uncovered. In this case we only discovered a few structural conditions that we didn’t know were there so it was nothing major.”

In order to facilitate the refurbishment works on the existing building the inside will be fully stripped out and the west stair core will be demolished. The existing building’s ground floor up to level two will be reclad with glass curtain walling; all the windows will be replaced and the escape stairs will be overclad with aluminium rain screening.

The hotel group is a global company with branches in the USA, Morocco and the UK, as well as projects in construction in Qatar, Moscow, Istanbul and the Bahamas. Sea Containers House will be the third hotel venue Morgan Hotel Group have opened in London; St Martin’s Lane and Sanderson are the others and maintain the boutique, high end ethos of the chain.

Morgan’s Hotel Group is a global company within the lifestyle hospitality sector with an impressive portfolio of hotels worldwide. The hotels have four different brands which represent different aspects of the group’s ethos; these include Delano, Mondrian, Hudson and the Originals.

The boutique lifestyle hotel has a progressive star rating, as do the other venues. Designed by Tom Dixon the hotel is impressive in its design. Morgans other Hotels in London were built 12 years ago and designed by Phillipe Starck. Both Hotels are currently undergoing renovation and will be completed mid 2014.

Michael French said that the hotel’s location on the River Thames makes it a unique venue; the chain’s other hotels in London are located in Soho and so do not offer the same breathtaking views.

“The enjoyment for me has always been being able to build something; I was a chef for 23 years and I always enjoyed the creative process. I went into real estate because I like to take something old and turn it into something relevant. It is really satisfying.”

Works on the 14 storey building were undertaken by Byrne Group. The company provide a varied range of services on construction projects including formwork, fit out services, frame engineering, high-end interiors and prefabricated cassette construction.