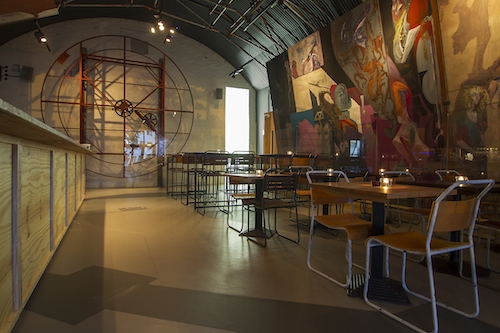 Award-winning interior designers, B3 Designers have created the interiors of newly opened cafe/bar Topolski, located in the Hungerford arches next to the South Bank Centre.

The new venue replaces the former Topolski Century art bunker and has a self-supporting scaffolding structure that holds and displays the artwork of Feliks Topolski’s.

Feliks Topolski established his studio in 1953 in a nearby arch and in 1975 acquired the arches where newly opened Topolski bar/restaurant is now located. B3 Designers’ brief was to turn this 370 square metre arch space into a venue that would allow visitors to truly enjoy Topolski’s works of art.

The design incorporates a counter bar and seating for the Company of Cooks food offering whilst at the same time creates an aesthetic that reflects Topolski’s utilitarian artistic approach. One of the main interior features of the site is the reclaimed scaffolding structure within the ceiling of the arches which is ideal for showcasing such huge pieces of art work. 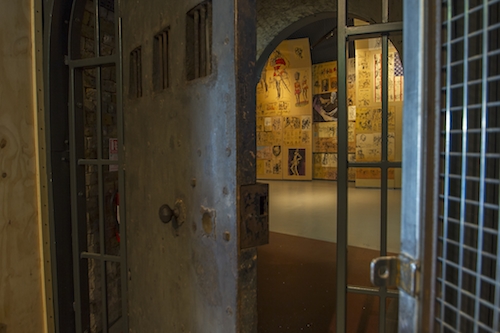 The bar top itself is made from reclaimed school desks whose surfaces are covered in graffiti. The back of the arch celebrates the Topolski Chronicles – hand sketched accounts of iconic figures and events that have appeared throughout the 20th Century, including Mahatma Ghandi, Winston Churchill, HG Wells and Elvis Presley.

B3 Designers have referenced the Topolski Chronicles using bespoke papier-mâché wallpaper which incorporates the illustrations. The use of illustrations is again very reflective of Topolski’s artistic manner, which celebrated art in everyday life. 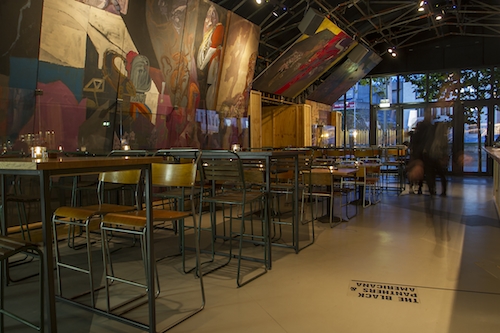 Mark Bithrey, Design Director and Founder of B3 Designers, said:

“The physical constraint of the railway arches challenged us in a really exciting way, to innovate a mechanism to hold and display the artwork.

“The scaffolding structure provided a solution to this and creates a great backdrop for a food, music and dance venue honouring Feliks Topolski’s work.”

Topolski cafe/bar is open from Monday to Saturday. The concise all-day menu, composed by Company of Cooks chef Bruce Wilson and Claire Clark, takes its cue from a range of European cuisines. Whether coming alone or with friends, visitors will be sure to experience Topolski’s passion for life through his artwork, visuals and entertainment evenings. Topolski bar and restaurant opened on November 1 at 150-152 Hungerford Bridge, Concert Hall Approach, Waterloo, London SE1 8XU. 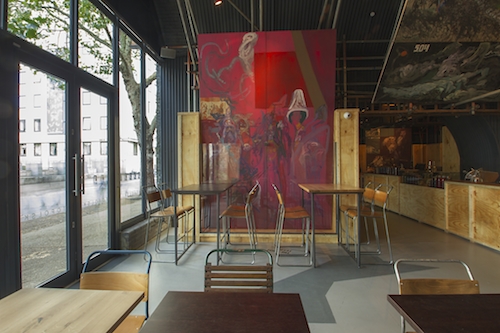 For more information about B3 Designers, please visit: www.b3designers.co.uk.