Welcome to the first edition of Premier Construction magazine of 2014. 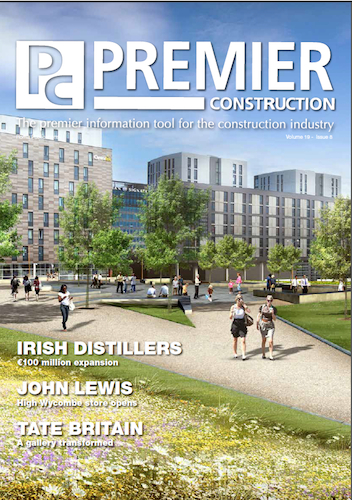 Welcome to the first edition of Premier Construction magazine of 2014.

This month we kick off the New Year with a look at some fantastic new developments, including some impressive schemes which brought 2013 to a close, including a fantastic refurbishment for John Lewis and an expansion scheme for Irish Distillers.

The store is the retailer’s largest single investment in redevelopment in 2013, creating more than 200 new jobs and was officially opened at an event attended by Sir Stuart Hampson, High Sheriff of Buckinghamshire.

Before the newly refurbished store opened its doors, Managing Director of John Lewis High Wycombe, Lisa Williams, delivered a speech to her team of Partners (staff) about the role they would play in the new store.

“I was thrilled to be able to reveal the end results of our £16 million refurbishment. The opening of the fashion department was a long term aspiration of ours and we hope customers enjoy the new offer along with the other departments and services that the investment has brought. It has been 25 years since John Lewis High Wycombe opened and I’m confident that customers will enjoy the newly refurbished shop for another 25 years to come.”

Meanwhile, located in the town of Midleton, Co Cork, Irish Distillers recently embarked on one of the largest state-of-the-art expansion programmes in its history. The €100 million expansion project comprised the creation of a number of new process buildings, along with expansions to existing buildings and was implemented in order to double production capacity in the distillery to 64 million litres of pure alcohol.

As part of the investment, 350 construction jobs were created, with a further sixty permanent manufacturing and technical jobs also created.

With all this and more, join us as we delve into the impressive projects that continue to shape our landscape.