Set up in 1986 by the Murrell brothers, Five Guys is an American burger restaurant, specialising in fresh, juicy burgers with an impressive array of toppings.

With more than 1,000 locations in the US, and with 1500 units in development, Five Guys has now moved across the pond to open restaurants in the UK.

Five Guys Covent Garden opened its first UK restaurant on 4th July 2013 – American Independence Day – in Covent Garden and has now opened its latest restaurant in Islington. Five Guys serves up the same delicious burgers that the brand has become famous for in the States, alongside a selection of hot dogs, sandwiches and fries and is proving very popular with customers!

With countless ways to order a burger at Five Guys the brand continues to make its mark and those pressed for time can breathe a sigh of relief as an online ordering service is also available.

Five Guys have plans to open a further 20 sumptuous eateries in the UK over the coming year. Work began on their Islington branch in London at the beginning of August 2013 and was completed in an impressive twelve weeks thanks to the superior fit-out services of main contractors Fileturn. 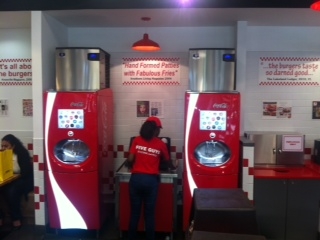 Premier Hospitality caught up with Geoff Henderson, Fileturn’s Contract Manager, to find out more about the project. Geoff said:

“Our Managing Director was offered a trip to America to meet the client and look at some of the stores with a view to doing fit-out services for them and negotiations went from there. We did all the demolition work on the Islington site which was an old derelict Starbucks before the renovation project began.”

Geoff said the project was a standard specification fit-out including the installation of red and white tiles and a tiled floor. The branded signs also adorn the venue above the large freestyle units which dispense numerous variations of Coca Cola at the press of a button.

The two storey venue sits 60 people and spans the ground floor and basement. On the ground floor the kitchen, tills, service area and seating can be found. The basement hosts most of the seating facilities as well as the back of house area for the venues staff.

The venue is located in a parade of restaurant and pubs and so during the project Geoff liaised with traders along the strip to ensure the work was not disruptive. Deliveries to the site were organised for early in the morning to ensure minimum noise. The on site management team had to be organised to ensure dust did not drift onto other premises. The team were on site six days a week and therefore could get the project completed in a record 12 weeks. 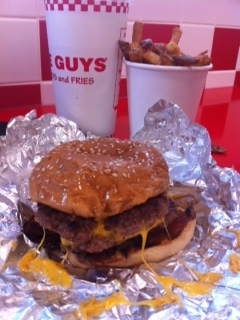 Geoff said it meant a lot to Fileturn to be involved with Five Guys:

“Five Guys UK developments are a big part of our business and we are really looking forward to building the next 20 venues with them. We are building a great working relationship with them and they have been over the moon with what we have done so far; moving forward we have got other venues lined up to bring to life. We have completed three so far and are on site of the fourth venue now.”

Based in Surrey Fileturn have been providing Principal Contractor services to various market sectors nationwide for over 30 years. They provide interior fit-outs, refurbishments and new builds to a number of high profile clients including Wagamamma, Cote restaurants and Bills Ta Geoff.

J H Electrical specialise in electrical installations in the leisure industry, having been in operation since 1997 they have built up a vast portfolio of business. Based in LLeicestershire the firm pride themselves on the quality of their work and maintaining high standards of workmanship and customer care at all times. 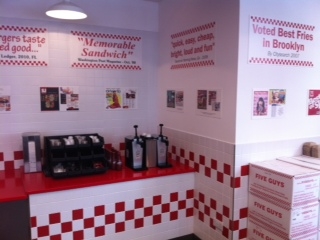 “We are very happy to be entrusted with the development of Five Guys and we hope to carry on in the future. We pride ourselves on delivering a quality service on time and in budget.”