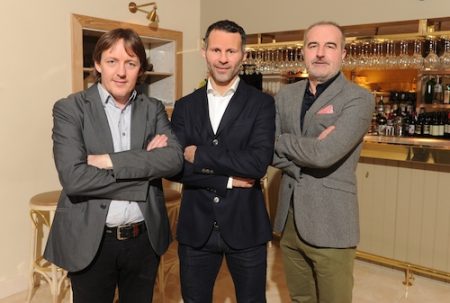 The new modern-British themed venue is owned by childhood friends Kelvin Gregory, Bernie Taylor and Manchester United’s renowned left midfielder Ryan Giggs, who all grew up together in the North Manchester suburb of Worsley. The successful trio have been friends since their school days and it has always been a lifelong ambition to open a restaurant in their area.

Bernie Taylor is an established restaurateur for over 20 years; Ryan Giggs, the famous footballer, has entered the hospitality industry recently and is eager to expand his portfolio; and Kelvin Gregory is a high profile solicitor.

Premier Hospitality caught up with Kelvin Gregory, who is a solicitor by trade, to find out more about the venue. The three friends took ownership of the site in October 2013 and began the process of redesigning and rebranding the venue, which had previously been operating as an Italian restaurant named Milan.

The refurbishment took 12 weeks in total with the official launch night taking place on the 23rd January 2014. The venue can seat 140 people in its main dining areas; contains a private dining area that seats 12 and includes a luxury outside area which seats another 40 people. 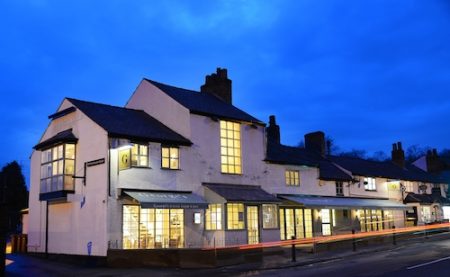 Upon entering the two storey building guests are greeted by an elegant bar and lounge area which serves up a combination of sumptuous cocktails and mouth-watering wines. Once guests have sampled a drink or two they can amble into the restaurant space which contains seating for 90 diners. The restaurant has bi-folding doors which open out onto the decked terrace giving the venue a spacious, airy feel.

The first floor can be accessed via a relocated staircase in the bar-lounge area. The first floor contains another section of the restaurant and also holds the venue’s private dining room. The private function space has bi-folding doors so it can be opened out to make a larger private dining space for 60 guests; and also boasts its own standalone bar.

The external decked dining space has been created on the front of the building; the area is self-contained due to the construction of a wall and fence bordering the decked area. The wall and fence have been painted the same shade as the rest of the building so the whole structure blends into one. The external area contains two decked spaces and each has a full retracting canopy as well as top of the range furniture and heaters. The space is ample for 40 guests and allows direct access to the restaurant from two sets of wide bi-folding doors.

The main contractors on the project were specialist fit out firm Sanderson and local firm Maison Developments who project managed the whole job. Maison Developments dealt with the rip out works, restructuring process and steel work, as well as working alongside the fit out contractors to oversee the installation of the bar and waiter stations. Freelance interior designer Louise James worked alongside Formroom Architects’ Alex Pritchett to redesign the restaurant.

The venue’s floors are covered in marble, porcelain tiles and reclaimed wood, with the main body of the restaurant comprising wooden floors with patchwork tiles. The walls are decorated with bespoke wallpaper, as is the ceiling with some walls clad in wood. In a bid to add colour to the space the tables are made of limed oak, the chairs are all light cream and ivory. 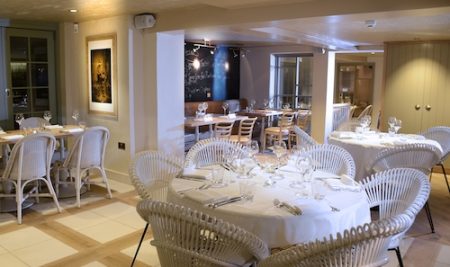 The on-site team moved the restaurant’s entrance and installed a porch to enhance the grand nature of the building. A corridor was installed on the first floor and was necessary to adhere to fire restrictions. Owner, Kelvin Gregory, said there were some issues with the development:

“One of the big issues was trying to obtain planning permission from the local authority to create an outside space, as it was opposed locally. We held an appeal and were successful with our bid; we therefore changed the whole front of the building and replaced the bay windows with by-folding doors. There was a fair bit of opposition to the project as the building is extremely old and so to renovate it we had to perform a lot of structural work. Although there was resistance to the outside planning application, we were sympathetic to the concerns raised and made sure the outside area is aesthetically pleasing, complimenting its surroundings.

“The project is something we have always wanted to do and so when the opportunity came to do it in our own village we jumped at the chance. We think it gives a facility that the village really needed. It is quite a leafy, affluent village and we wanted to introduce a quality restaurant to Worsley. It is in a lovely setting right next to the village’s canal.”

The restaurant acquires its name from Worsley’s local church which was designed by the famous Victorian architect Sir George Gilbert Scott. He also designed St Pancras Station and the Victorian Albert Monument so the owners wanted the venue to be relevant to the local area. The restaurant’s Head Chef is Andrew Parker, previously of Harvey Nicholls and Stanley House Hotel & Spa, who was trained by two starred Michelin chef Michael Wignall.