The Crown & Thistle is an 18-room boutique hotel situated on Bridge Street, Abingdon. In addition to providing guests with a great night’s stay, the hotel includes a 90-cover restaurant, a pub and a function room.

In 2013 the hotel underwent a major revamp to not only bring it up to date, but to also inject a new lease of life into what was a tired looking Listed building. The site’s makeover was implemented on behalf of the hotel’s owners, Oakman Inns & Restaurants Limited, and saw extensive refurbishment work take place, including the transformation of the existing stable block into a banqueting kitchen.

THWG Building Solutions was the main contractor on the project, whilst People in Space provided all architectural services.

“The Crown & Thistle is historically a coaching inn which dates back to 1603 and is located within the centre of Abingdon, just off the Thames. The site was purchased by Oakman Inns & Restaurants Limited in 2011 with the immediate intention of refurbishing the building.

“The hotel was in a poor standard of repair and had not had any major works conducted on the site for decades The purchase of the site presented the perfect opportunity to implement a substantial upgrade of all the elements of the hotel.”

Work began on the project in July 2013 and ran for 20 weeks. The Crown & Thistle began trading at the end of November the same year and was met with excellent feedback.

“The whole site is centred around a cobbled courtyard, creating a village-type scene. The site includes a mixture of buildings from the 17th, 18th and 19th centuries, which were linked by some 20th century additions. We demolished these additions and then rebuilt them to a higher standard, which also allowed us to introduce some contemporary elements.”

Guests enter The Crown & Thistle through a very traditional archway which leads into the courtyard. Here they have the option of turning left into the pub and the hotel’s reception, or going to the right which takes them info a cafe area and restaurant.

When entering the courtyard guests will also see the new function room, which was previously an underused barn. Permission was granted to open up the first floor of the barn to create a double-height space, forming a function space which can now accommodate between 60 and 100 people.

“The barn is a real highlight of the project because it was one of the areas of the site that wasn’t being used. If this aspect of the project had not been undertaken then guests would not have been able to appreciate the space that was there. We used a very lightweight approach, introducing new steel columns and substantial oak beams – our intention was to lead people to think that this area of the hotel had been like this for many years.”

The refurbishment of The Crown & Thistle was very extensive and included remodelling, rewiring and new plumbing. Two existing fireplaces in the pub were re-engineered, whilst a third fireplace in the restaurant was restored. The fire places have become visual focal points and add a certain character to the different areas of the hotel.

“There were a lot of aspects of the project that customers won’t be aware of, but they all add up to the general comfort and efficiency of a modern hotel.”

With such an interesting project, People in Space Architects were understandably very pleased to be involved with the refurbishment of The Crown & Thistle. 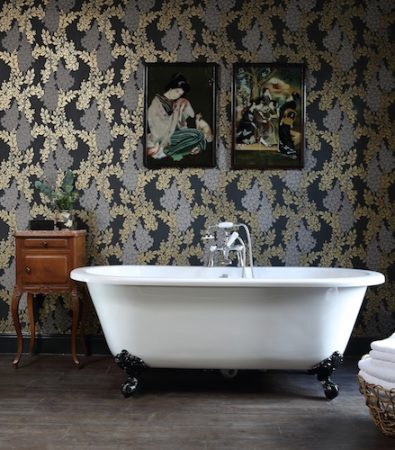 “We are always happy to be a part of schemes that are modern in nature, however over the last few years we have become involved with more specialist works on historic buildings such as this one. These projects are a lot more challenging and can often take two to three times as long to complete purely from a planning and conservation point of view, but they are very interesting and we value our involvement on schemes like this.”

For more information on The Crown & Thistle please visit: www.crownandthistleabingdon.co.uk.