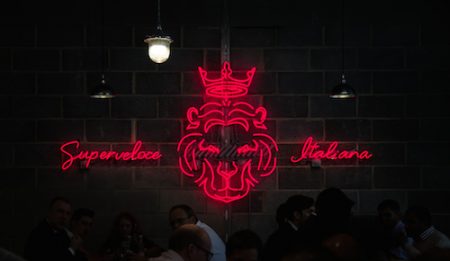 I-Am Associates is a London based branding consultancy and design agency, creating and delivering big brand ideas across some of the biggest names in the hospitality and retail sector.

Working with a range of clients from The National Trust through to Coca-Cola and Diesel, I-Am Associates has been involved with numerous high profile projects, many of which have been recognised by industry peers.

At the recent Casual Dining Design Awards 2014, I-Am Associates received an impressive three nominations for sites that it had recently worked on – Chilango, Pizza Union and FerahFeza Istanbul. Pizza Union and FerahFeza Istanbul both received a nomination in the Best Designed Independent Restaurant 2014 category, whilst Chilango was nominated amongst a pretty impressive list within the Best Designed Multiple Restaurant 2014 category.

Receiving such recognition in one ceremony was very important to I-Am Associates Managing Director Jon Blakeney. When Premier Hospitality caught up with Jon, he said:

“Being nominated three times was hugely exciting. What we have learned is that our clients want to work with design practices that win awards and they want to be winning awards themselves. So ceremonies like this are hugely important. Awards that we have won in the past in different sectors have been worthwhile for us, so recognition at the Casual Dining Design Awards is crucial for us.”

Chilango is a fresh Mexican restaurant, serving up gourmet Burritos and tacos, either to eat in or take away. I-Am Associates have been involved with the Chilango brand since its early days and the practice has seen the restaurant continue to go from strength-to-strength.

“Chilango came to us around five years ago, when the two owners Eric Partaker and Dan Houghton left their former jobs and decided to follow their dream by opening up a Mexican restaurant. They made a success of it, but felt they could do a little more, so they came to us and we started working with them.

“After about nine months we changed the name of their restaurant to Chilango, a slang term for residents of Mexico City, to reflect the urban, gritty and raw Mexican concept of the restaurant. We had visited Mexico City to get a real understanding of the culture and it was there that we decided Chilango was the perfect name, so we suggested a change and then we created a completely different brand personality moving forward. We have completed six Chilango restaurants to date, and each has a different expression of Chilango’s vibrant personality.”

Serving Italian artisan pizzas, Pizza Union is fantastic slice of Italy situated on Sandy’s Row, Spitalfields, London. The unique selling point of Pizza Union is the speed with which each tasty dish is served up – in around five minutes!

“The pizza is cooked at the temperature that it was originally cooked at, back in Naples. It’s incredible heat in a sophisticated oven, producing incredibly fast pizza which has never been available in this country before. Pizza Union really changes people’s perception of what it is like to order and eat fresh pizza. The brand design concept is very much rooted in the streets of Naples.”

Keith Ward was the project manager on Pizza Union, whilst Fileturn Ltd was the main contractor. Ashleigh Signs provided signage and Inox Equipment supplied the kitchen.

FerahFeza meanwhile is another innovative restaurant, situated in Istanbul’s up and coming district of Karköy. The restaurant features an unconventional combination of traditional Turkish materials set within a contemporary architectural environment.

“FerahFeza is a new concept, situated in a great roof top location. It offers great contemporary Turkish dishes influenced by European cooking. Working with our clients we came up with a name along with a brand concept and since opening it has become the go-to destination in Istanbul. The food is exceptional and it has been a real success story.”