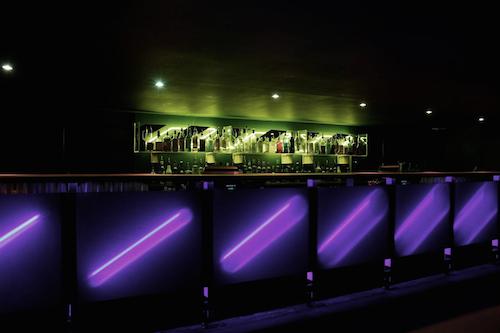 South is a brand new underground basement nightclub in Manchester.

Premier Hospitality caught up with Patrick McKinney, Design Director at Ben Kelly Design, who worked on the project to find out more. He said:

“We have worked with Aaron Mellor previously during the creation of Factory 251 nightclub in Manchester and so when South came up he wanted us to be involved. The venue had previously had been a nightclub, but had been abused over the years and so we completely stripped it back and cleaned it up.”

Working with main contractors Concept 9, Ben Kelly Design, installed a new bar which is back lit with an impressive optical poly-con panel. The basement venue has also been fitted with a Rave Cave, a large timber box which acts as a dance floor and DJ booth in the centre of the club. The design of the club is quite simple making the large dance floor stand out along with the brightly coloured bar.

“The space itself is fairly utilitarian, a raw, gritty interior into which precise new feature elements have been inserted. It is a really simple but effective fit out.”

Clubbers enter the venue through a quirky side door situated on the corner of the building, before descending a flight of stairs into the single volumed basement club. Patrick said that during the year-long project, which completed in June 2013, the on site team did not encounter any real challenges. Access was not an issue, despite the club being located in the basement, and the project ran smoothly with great interaction between the main contractor, architects and client.

On the ground floor of the building there is an Italian restaurant and so those looking for South will have to be persistent in their hunt for the quirky, out of site venue. Patrick commented:

“As a company we work across many sectors such as offices, exhibitions and gyms how ever it is always great to design nightclubs. They are great spaces which provide great opportunities for creativity. It was fabulous to reach the nomination stages of the Restaurant & Bar Design Awards.”

South was originally launched by Paul Cons, the promotions manager of the Hacienda and creator of Flesh, as a kickback from Gunchester and the violence surrounding the Hacienda at the time. South was initially created as an antidote to the superclub, a tiny disco dive club which is dark and deliberately underground. South is now back, redesigned by Ben Kelly Design the original designer of the Hacienda.

Tokyo Industries already operates 14 venues across the UK, including the award winning Digital in Newcastle and Brighton, and the Tokyo Mansion Party venues. Director Aaron Mellor was influenced by the Manchester music scene of the late 1980s, including bands such as New Order, Inspiral Carpets and The Stone Roses.

A lot of the Tokyo estate, target northern towns with a large student population including Newcastle, Huddersﬁeld, Oldham, Manchester and Bradford. Most of the venues also occupy historic buildings that lend to the party-theatre aspect of the experience. Whilst all of the Tokyo units have a definite brand identity each venue still retains its own character and individuality.

Concept 9 Ltd are specialist joinery manufacturers and bar fitters who work all over the country, carrying out projects in a plethora of venues within the leisure industry. Having been in operation for two years the firm has worked with an array of high profile clients on numerous projects including projects such as Factory 251 in Manchester, The Cairn Hotel and Jules Bistro in Newcastle.

Other projects the firm have been a part of include Van Mildert premium fashion retailer in the Metro Centre in Gateshead and Players Bar in Leeds. Premier Hospitality caught up with Wayne Holmes, from Concept 9 Ltd, to find out more about the firms latest project; South in Manchester.

“We were the main contractors during the project which involved a full refurbishment of the venue. We were on site for six weeks and are glad to continue a long standing relationship with Tokyo Industries, as we do all the work for them.

“It is also nice to undertake projects in Manchester, as we are well known in Newcastle and London and so it is nice to spread the word in Manchester. We pride ourselves on the quality of our workmanship.”