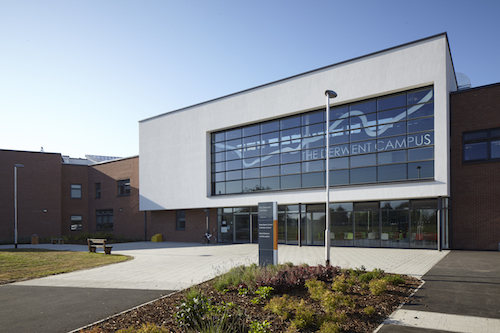 The merging of Noel-Baker School and St Martins School in Derby has now been completed and has seen the two educational institutions conjoin as part of the Building Schools For The Future scheme.

The governmental initiative was abandoned shortly after the coalition government came into power but fortunately the Noel-Baker and St Martins redevelopment project was still funded.

Premier Construction caught up with Steve Golding, from Nicholas Hare Architects, who was the project architect on the development. Nicholas Hare Architects worked alongside main contractors Balfour Beatty after securing the three year contract to redevelop the new secondary school, which is located on the original Noel-Baker School site, in Derby.

The new school structure has been erected on what used to be Noel-Baker’s playing fields and comprises three buildings; the main school building, a separate sports and vocational centre and an energy centre.

Planning permission was achieved in September 2010 and works began on site in December 2010, with the on site team constructing the main school building first. The erection of the sports and vocational centre was undertaken shortly after and all three buildings were completed and handed over to the schools in Spring 2012.

Both schools had established a close working relationship prior to the redevelopment project and so it made sense to relocate St Martins School, previously a mile away from Noel-Baker School. They have quickly settled into the new facilities, and the schools have named the new site the Derwent Campus.

Whilst the new builds were being erected Noel-Baker students remained in the original buildings and simply transferred over to the new structures upon completion. There was no need for any temporary accommodation during the construction process as there was only a slight overlap; just one of the existing art rooms needed to be demolished to allow for the new build.

Both schools wanted to ensure that the education spaces were inspirational and designed from the inside out. The Noel-Baker section of the school centres around two atria which have been planted with an array of trees. These atria have been entitled the winter gardens; off each garden there are two, three storey strawberry shaped clusters, around which the teaching spaces are arranged. St Martins School has been similarly arranged, so the building reads as a coherent whole, with two, two storey wings which radiate from a central heart space, containing the dining area.

After the new buildings were completed, in Autumn 2012, the on site team began working on the next phase; demolishing the old buildings and landscaping the site to form the rest of the car parking. This part of the project was fully completed by May 2013.

“It was a challenge operating a large construction site next to an operational school, especially for the main contractor. Another issue arose when the main steel and fabrications subcontractor went out of business towards the end of the project; luckily 98% of the steel had already been erected but the setback did cause a slight delay.” 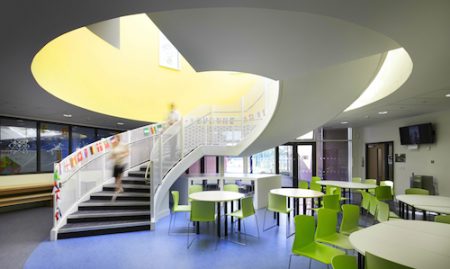 The project however ran relatively smoothly overall and Steve said it was a pleasure for Nicholas Hare Architects to be involved with such a great project. He commented:

“It has been fantastic to be involved. It is a shame however that the Building Schools For The Future scheme was cancelled as many more schools could have been regenerated if the initiative had gone ahead. However, on a positive note, we are very pleased that this project went ahead and was successful.”

The project has gained a lot of recognition and was recently awarded a RIBA award in May this year, in the East Midlands Regional 2014 category.