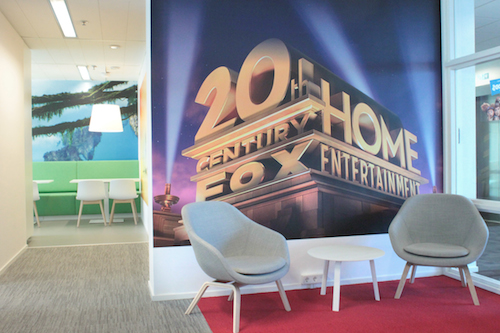 The 540 square metre office, which was completed last year, has been transformed from a traditional work space into a playful, flexible environment.

Premier Hospitality caught up with Francesco Messori, from D/DOCK, who acted as the project managers and interior designers during the renovation. The office is situated in South East Amsterdam and has been personalised in line with the firm’s identity. Throughout the office the walls have been adorned with numerous prints and graphics referencing 20th Century Fox’s impressive portfolio of films such as The Life of Pi, Titanic and Madagascar.

“D/DOCK designed and delivered the whole project taking a traditional office and creating a personalised atmosphere for the 20th Century Fox brand. The clients are very fast thinking and were very clear about what they wanted so it was a very exciting project to be a part of. The iconography we have used references the firm’s movies and characterises the project; it has definitely been different to redesigning a lawyer’s office.”

The new office holds 40 employees and has been designed in an open plan fashion to encourage effective communication. The new office provides both closed and open offices, as well as various meeting rooms and open work places; again stimulating clear and quick communication between the employees. A fresh glass partitioning has been installed into the space in order to separate the meeting rooms from the main office space.

The client was eager to create a transparent atmosphere in the office, effective communication lines, as well as a common lunch area. The lunch area is an especial triumph comprising an array of graphics on the walls, derived from films produced by 20th Century Fox.

Francesco said that the design has been kept very clean and fresh, utilising natural colours for the carpets and furniture including green, red and white. The space is soft in its design but is continually brightened up with playful movie prints situated on the office walls and at the end of corridors. The space has been transformed into an attractive, surprising environment in line with 20th Century Fox’s inspired design concept and D/DOCK’s exceptional commitment to the job.

D/DOCK was founded ten years ago as an interior design studio and has since provided design concepts for national and international organisations. The firm is always eager to create environments thatstimulate learning and thoughtful reflection.

The firm spread their expertise over various sectors working on projects in the following industries; Care, Education, Hospitality, Retail and Corporate. The company has worked with an array of prestigious clients including Heineken, Google, Delta Lloyd, B/S/H/, Easynet, Paraiso Aruba, TomTom, and NH Hoteles, and collaborated with interior designer Piet Boon and Architect William McDonough. D/DOCK currently operates in counties as Austria, China, Taipei and Scandinavia where they work together with renowned interior designer Marcel Wanders and companies such as Philips.

20th Century Fox came into being in 1904 thanks to William Fox’s impressive hand-cranked films which he launched in New York’s Lower East Side. Although the company’s beginnings were humble the desire to entertain people has remained at the core of the company ever since.  By 1915 Fox’s shows were extremely popular and his single screen quickly grew into a chain of 25 theaters around New York City, and then into a movie making business.

Fox left New York in 1915 and moved to Los Angeles where he discovered movie stars such as Tom Mix, Theda Bara, and George O’Brien.  Fox pioneered the use of sound with the development of the Movietone sound system and merged with rising movie powerhouse Twentieth Century Pictures.

The renamed 20th Century Fox have since established an impressive portfolio of films including their first Cinemascope production The Robe and the hugely successful Avatar, the highest-grossing picture of all time. 20th Century Fox modern classics include the Academy Award winning Sound of Music, Star Wars, the renowned Die Hard series, Home Alone, X-Men and Mrs. Doubtfire.

The movie studio have always been keen to create movies that matter which is visible via titles such as Braveheart , Titanic, Slumdog Millionaire; and more recently the Life of Pi and The Fault In Our Stars.

BILTZ is a specialist painting business, as well as offering clients an architectural renovation service. The firm also have an upholstery department and an architectural fire department. The firm has been in operation for 10 years having only recently changed its name to Biltz three years ago.

Headed by Henny Vet, Owner and President of the firm, the company has worked alongside numerous high profile clients, establishing an impressive portfolio. Previously the firm have undertaken projects for investment firm Delta Lloyd, Dutch Royal Airline KLM and the Deutsche Bank.

Most recently the firm has been involved in the creation of new office space for 20th Century Fox employees in Amsterdam.

Speaking to Henny Vet, the firm’s owner told us:

“We take pride in making things happen as small as we are, with only 150 employees! The team is young, well educated, and has a high standard of quality. We won’t take no for an answer, and we are driven to deliver the best!”