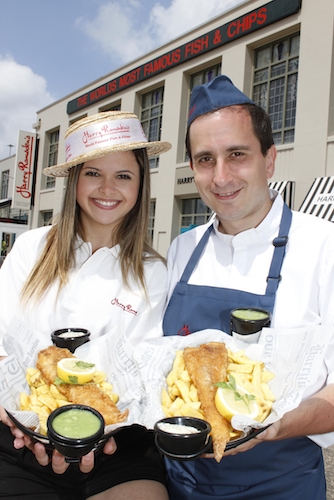 Harry Ramsden’s, the iconic British brand, world famous for its fish and chips, is to open two brand new outlets, at opposite ends of the country.

As part of recently signed franchise agreements, an 80 seater restaurant opened on Tuesday 5th August in Worthing whilst later in the month, a ‘traditional local’ is set to open in Larbert, near Falkirk.

“Over the past two years, Harry Ramsden’s has been enjoying record sales as a result of both brand evolution and ongoing investment, so this the ideal time to increase our presence across the UK. Whilst rightly world famous for fish and chips, fans old and new are clearly enjoying the fact that Harry Ramsden’s offers much more nowadays, in terms of menu options and price points. With catchments of over 100,000 people in both Larbert and Worthing, we are hopeful that the high levels of trust associated with the brand, coupled with the higher quality product offered, will prove popular with the residents of both towns and beyond.”

Harry Ramsden’s has been serving generations of families for over 85 years and currently operates from 25 locations across the UK and Ireland. In 2013, the brand confirmed plans to return to the roots of its eponymous founder with the signing of a franchise agreement which will see 50 new outlets open in Yorkshire by 2018, creating up to 500 jobs.