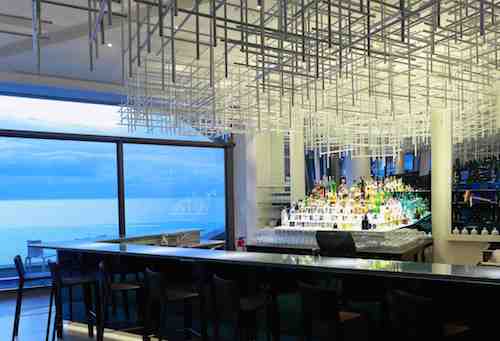 Nobu, one of the world’s most recognised Japanese restaurant chains, has recently opened its newest venue in conjunction with the exclusive Fairmont Monte Carlo, which is situated in a beautiful spot in Monaco.

Known for its innovative new style cuisine paired with a hip crowd and celebrity following, Nobu Monaco is set to be another successful addition to the chain.

The Nobu Fairmont Monte Carlo restaurant was unveiled in all its glory in the presence of the chain’s owner, Chef Nobu Matsuhisa, Sovereign Prince Albert and Princess Charlène, Robert DeNiro and Meir Tepper. 200 additional prestigious guests were welcomed into the luxurious restaurant to experience a traditional Japanese Sake Ceremony, set on a stage in the heart of the restaurant, accompanied by the hotel’s owner Mr Ian Livingstone. The restaurant is open to guests and non-guests of the Fairmont offering a cosy, elegant environment for diners to relax in.

The design for the venue has been inspired by the panoramic and uninterrupted sea view visible directly outside the restaurant. The venue looks from a distance as if it is floating above the sea and from the interior the restaurant is at one with the water; large blue mirrors adorn the space, making the venue seem larger and adding to the general ambience of the space.

The colour scheme of the space utilises the same palette of blues visible on the mirrors and in the bar. A feature piece of the restaurant is the use of floor to ceiling windows on three sides of the building offering a unique view for diners.

The 200 cover venue also boasts an impressive sculpture, comprised of thousands of steels rods, running through the entire ceiling of the restaurant and linking each part of the dining area to the ceiling. The rods were inspired by the complex structure coral reef lying below the seas surface outside the restaurants windows. The finished work also evokes images of chopsticks reminding diners of the exciting fusion of flavours they are about to sample.

Such is the venue’s success it was nominated in this year’s Restaurant and Bar Design Awards. Works on site began in February 2013, with Irish based 3 Interiors acting as main contractors on the 10 month project. The planning process began in September 2012 which was undertaken by project designers Martin Hulbert Design.

Premier Hospitality caught up with Martin Hulbert, the Managing Director of Martin Hulbert Design to find out more about the project. He said:

“The restaurant is located in a fantastic space, in a fantastic setting, and so to be able to work with a venue with such an incredible view was a really lovely opportunity. I was also very lucky to have a client with an open mind and this is part of why it’s been such a huge success.

“I worked on the project alongside my team which included Jay Grierson, who managed the project, and Samantha Miller.”

Martin, interior designer on the chain’s most recent venture, said there were some challenges during the renovation project, but nothing unexpected. He added that the on site team were able to work around them and transform the space, a restaurant previously called The Argentine, into a mind blowing Nobu venue.

Guests enter the venue via an impressive, large bar containing a pyramid structure which boasts an array of bottles on an up-lit back bar. The restaurant is extremely spacious containing two intimate private dining areas hidden behind semi-translucent sheered curtains. The bespoke furniture featured throughout the space adds to the venue’s elegance. The tables were designed specifically for the restaurant and feature interchangeable circular tops. Some of the tables are also encircled by semi-circular, sea blue booth seating.

Located between the legendary Casino of Monte Carlo and the sparkling Mediterranean Sea, the Fairmont Monte Carlo’s is reputed to be the finest luxury resort in Monaco. The cruise liner is moored on Monaco’s coastline and offers breathtaking views of the sea, the F1 Grand Prix Fairmont Hairpin and the vibrant town. In its brand new and elegant atmosphere, the Nobu Fairmont Monte Carlo restaurant offers the perfect vantage point to glimpse 3 countries, Monaco, France and Italy.

The Fairmont Monte Carlo is contained within an awe inspiring seven storey great ship moored at the heart of one of the most exclusive destinations worldwide. The venue has recently been transformed in an impressive €45 million refurbishment ensuring guests enjoy a dazzling cruise through all the pleasures of the Mediterranean and the Principality.

The unique four-star luxury convention Fairmont Monte Carlo resort now holds the delightful Nobu restaurant allowing diners the chance to explore the beauty of the Principality of Monaco in between the Mediterranean Sea and the legendary Casino.