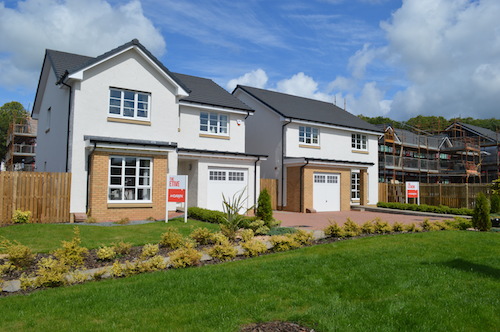 The development comprises 57 properties, with a mix of three and four-bedroom detached and semi-detached houses, all set within large open green spaces.

Work began on the project in April 2013 and so far 29 of the units have been built. With demand for the properties continuing to increase and work remaining on schedule, the development is due to reach completion in summer 2015.

“Sales have really picked up on the site and people are reserving properties before we have even built them. At first people are always waiting keen to see the show homes before the homes are built, but the trend has really shifted on this development and they are now buying them off-plan.”

Fordbank is being constructed on a Greenfield site and as part of the planning restrictions the development retains some of the site’s original greenery. The inclusion of existing trees adds to the country-like feel of the development, making it ideal for home owners looking for a picturesque setting.

The houses at Fordbank are being constructed from a timber kit with brick and block façade, uPVC windows and traditional tiled roofs. Internally all of the properties are completed with high quality finishes to living areas, including fitted kitchens. The properties at Fordbank also include front and rear gardens with monoblock driveways.

Such is the success of the development that so far David and his team have picked up twin recognition at the NHBC Awards, with an NHBC Health & Safety commendation and an NHBC Pride in the Job Award.

“We entered the Health & Safety category alongside the Pride in the Job category and it has proved very successful for us. We received two visits from the NHBC’s Scottish representative and then we had a visit from his English colleague which resulted in the commendation. This commendation took us into a list of the top 51 sites in Great Britain and this is a great achievement.”

“We submitted three sites for Pride in the Job this year and fortunately for me, I received the award. The development has been a lot of hard work and I don’t think I fully understood what was involved in achieving an award like this at first, but it has been truly rewarding.

“At Dawn Homes we build a quality home, but this award is all about changing the approach and managing projects in a different way. It has been a big learning curve but certainly a worthwhile one.”

For more information about the Fordbank development, or Dawn Homes, please visit: www.dawn-homes.co.uk.