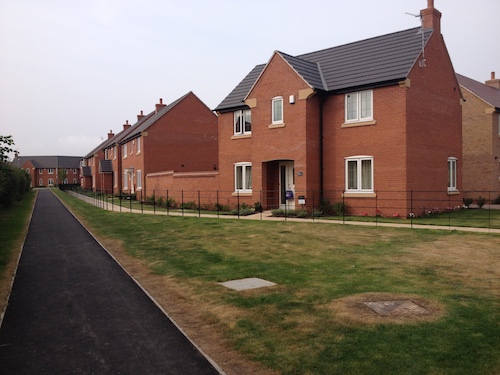 A William Davis development of 780 houses in Loughborough is running smoothly, with works underway on Phase Six of the project.

The site has been running for 11 years and is set to continue until 2020 providing a range of private housing to a number of buyers.

Premier Construction caught up with Russell Pitman, the Site Manager at William Davis, to find out more about the project, which has recently been awarded an NHBC Pride in the Job Award. Russell said the site was previously a Greenfield site and was being used as farmland; in order to secure the land William Davis agreed to build a new road and a bridge in order to connect the site to Loughborough. He added:

“The Grange Park development lies on Epinal Way in Loughborough, on Alan Dale Road and offers buyers a range of private housing from one bedroom flats to five bedroom detached houses. The site is running smoothly so far and we have so far built 250 units.”

Russell has been on the Grange Park development for seven years and is currently overseeing Phase Six of the project. Previous phases have involved the construction of specific house types at specific locations of the site; Phase Six however combines numerous house types including flats, four bed houses and five bed houses.

William Davis Operatives act as the main contractor for the project as most of the trades are in-house apart from the painters, plasterers and roofers which are subcontracted out. The design was also undertaken through William Davis and the architects on the project were SGP.

The standard five bed house on the site comprises impressive high ceilings and a grand open plan kitchen and dining room. The larger houses are finished to a high specification with a downstairs WC and utility room, study, lounge as well as an extra dining room.

The bedrooms in all of the larger houses come with built in wardrobes and en-suites with showers and baths; buyers can also specify if they want different sockets and radiators in the house.

All of the houses are completed with a magnolia and white finish but buyers can take advantage of William Davis’ soft furnishing s package at an extra cost. The larger houses utilise cylinder heating systems with condensing boilers, whereas normal combi-boilers are installed in the flats and smaller houses.

With regards to the NHBC award Russell said it is a great recognition for his hard work:

“Everybody does their job to the best of their ability but this award proves we are doing a decent job and it is a great reward. I’m so pleased to be recognised.”

Russell however is no stranger to receiving awards:

“I have been at Grange Park for seven years and have managed to receive seven NHBC awards on the trot, so I am eager to keep winning NHBC awards every year I’m here.”