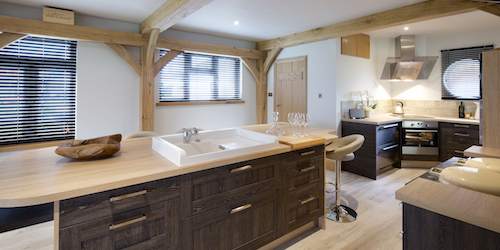 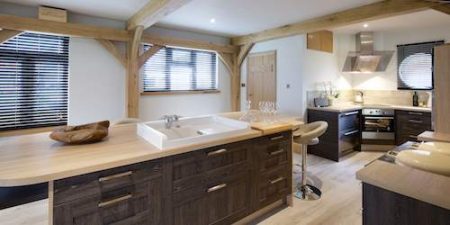 The 1950’s to 1970’s saw a trend to build taller, more linear, and higher density buildings. Le Corbusier, a pioneer of European architecture, believed a property should be a machine for living. Pre-fabrication started to creep in and a very ‘boxy’ style of property was developed. At the time these properties met with mixed reviews – whilst they were easy to maintain and well built with large rooms and tall ceilings, they weren’t very pleasing to the eye. These properties started the modern day living theme of lines and ikea style furniture and some would say very little character. These days you won’t find many that haven’t already been ripped of their original Formica and plastic interiors and sold many times over. So, it was a rare opportunity that appeared in March 2013 for Osborne & Rose to revitalize one of these properties that had been left untouched for generations.

It was a large box like property set amongst traditional Jersey granite farmhouses and out buildings. Unfortunately, as wonderful and grand as it may have been in its day, over time and with development of other buildings on the property, the house now appeared imposing and rather out of place. Osborne & Rose were commissioned with the brief: ‘create an appealing home of modern day comfort and style. Honour the history of the property but create useable space for family use’. Over the decades the properties rooms had lost their warmth and style and many were left to ruin through lack of use or need. Osborne & Rose were commissioned to come up with a new design and project manage the transformation. 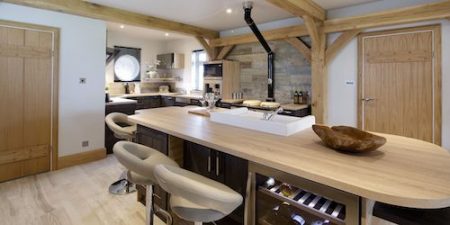 Osborne & Rose first sectioned off the priorities of the build so focus could be directed on a relatively speedy six-month turnaround. The team concentrated on the ground floor, converting three rooms into a wonderful open plan kitchen, dining and living space. Each area had clear definition whilst simultaneously achieving spatial freedom. The floor also accommodated a separate office, utility area, downstairs cloakroom, garage and store. Upstairs, a master en-suite was developed by utilizing a small bedroom, existing bathroom and separate toilet. The master bedroom now boasts an extensive luxury bathroom, without impacting on three further double bedrooms. On the same floor a further two bedrooms, landing area and bathroom have now become a separate one bedroom ‘granny flat’ or flexible income earner.

Internally, character has been reinstated by using green oak beams sourced from France. The original Aga has been retained and is much loved by the owners. The central stairway of iron balustrades has been turned around and replaced with wood and glass; this has created a large entrance hall highlighting the floor to ceiling atrium.

The 50’s and 60’s brought with them large rectangular windows on stairways and down the side of properties. These created a very art deco style, but were mainly chosen for the practical reason that they let more light into these big block buildings. This property did not disappoint, a six-metre panel frosted window was found hidden behind a porch on the front of the property. Once the porch was removed and a sheet of clear glass put in place of the old, the striking entrance appeared. The property still held many modern day ‘phase’ features like dado rails and picture rails. Some were put back in place using chunky oak; others were removed to give internal clean lines. It was quite clear that the client didn’t want a ‘new build’ so by keeping these little quirky features throughout, it brought the whole scheme together. All the design features complemented the new oak doors introduced throughout the property.

The client wasn’t afraid to be led by design or the recycling of materials; this gave Osborne & Rose room for artistic license. An element of fun was injected into the property by bringing back the shag pile carpets of the 60’s and also open fires that had been long lost to their electric cousins. Feature walls of reclaimed wooden panels were created giving hidden storage and a nautical feel, portholes were added to the entrance doors and sympathetic lighting was carefully chosen. All in all, this brought together the owners love of the sea and incorporated their personality into the home.

It was important that the property would also be as eco friendly as possible, fit in with the required regulations and be sustainably desirable. All the insulation was reviewed and replaced, the roof and walls relined, windows and doors repaired or replaced and under floor heating used where possible. The heat loss of this big old building is now at its minimum and the usage is easily regulated, not only helping with the environment but the families expenses of running a large property of this type.

It was also vital for this renovation to use as many local tradespeople and suppliers where possible; electricians, plumbers, bathroom specialists, and carpet fitters, as well as many other building materials and supplies, were sourced locally. This untypical farmhouse has become a showcase of the talent, skill and the dedication available to property owners in Jersey.

The property still echoes its wonderful history having been built by the client’s grandfather many decades ago. The stories the walls hold will always be sacred but now there is new life back in the property and it’s ready to house the tales of many more generations. It’s a vast property with many opportunities for further development and design, the project is ongoing and will continue to evolve into the appealing home of modern day comfort and style the clients require but as they say… Rome wasn’t built in a day.

To find out more about Osborne & Rose please visit: www.osborneandrose.com