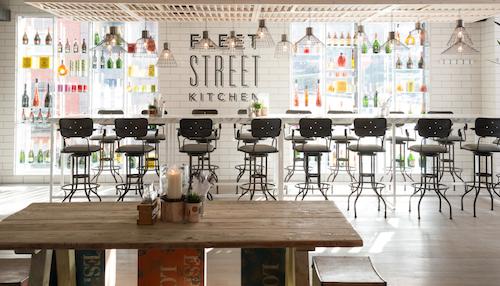 Shortlisted for two Restaurant and Bar Design Awards, Cheltenham based Raw Design is growing in success year by year, creating a portfolio of prestigious […] 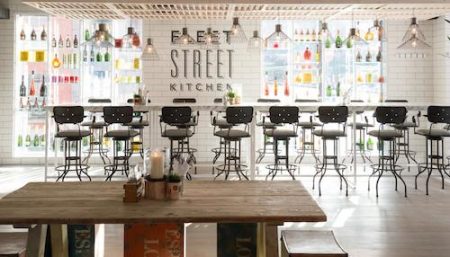 Shortlisted for two Restaurant and Bar Design Awards, Cheltenham based Raw Design is growing in success year by year, creating a portfolio of prestigious clients and unique designs.

Since setting up, Raw Design have worked with CenterParcs, Nando’s, TGI Fridays, Luminar Leisure, Cirrus Inns, Town and Country Inns, Palmer Hargreaves and Mitchell’s and Butler amongst other impressive brands. Working with Town and Country Inns, Raw Design worked as the main designers for Fleet Street Kitchen; a restaurant and bar venue in the city centre of Birmingham.

Fleet Street Kitchen is sited in a modern build apartment block on the ground and basement floors and opens out onto a canal side terrace. Before its redevelopment, the venue suffered from a lack of natural light, modern uninspiring grey windows and a lack of any features.

Town and Country Inns contacted Raw Design to produce a contemporary friendly restaurant and bar space to the ground floor with a late night live venue on the basement level. The restaurant was to champion a predominantly locally sourced menu and be home to a Barbacoa chargrill, so the interior had to reflect both.

The ground floor of Fleet Street Kitchen was defined into three zones; formal dining, relaxed dining and a bar area. Initially, Raw Design removed the front façade, cutting it back into the building with full height glazing to ensure maximum light access into the building. A series of demountable shutters were taken internally up over the existing windows and across the ceilings to define the dining areas within the space, these were then up-lit with colour changing LED’s to dramatically take the atmosphere from day to night.

The furniture is an eclectic mix of loose tables, chairs and benches, a high drinking and casual dining area also being created with a long feature marble table. The toilets are sited in the basement level, where a large folding wall feature opens up into the late night lounge and bar area. This has a small stage for live bands, large booth seats with graffiti art walls and a large wrap around bar which encloses the emergency stair core of the building. The front area has a custom marble mosaic floor with exposed brickwork, backlit mirrors and an oversized reclaimed chandelier and steel recycled tables.

Working with Cirrus Inns, Raw Design has also designed The Kings Arms, a pub with rooms, in Gloucestershire.

Situated on two main routes through the English countryside, The Kings Arms was built in 1652 as a coaching inn. Since then, the venue was bought by Cirrus Inns in September of last year, who then instructed the expertise of Raw Design to create a modern country inn with private dining and letting rooms for guests. During the allotted four months, Raw Design stripped back years of unsuccessful redecoration and conversion to bring back the historic nature of the building, giving it a contemporary twist.

On entering the space, grape picking buckets were transformed into light fittings with the rest of the space being dedicated to blackboard walls and local stag’s heads. The main lounge bar was flagged with a stone floor reminiscent of the original and the restaurant was timbered with blackened ash.

The bar area was reworked with antique timber, brick tiles and LED lighting, giving a functional yet historic feel. All of the furniture was selected from salvaged and up cycled items, as was the local artwork. The dining area has large digital print murals which reflect the history and new deep buttoned leather seating breaks up the space, creating cosy corners and intimate, yet functional, dining areas.

The scheme also involved the creation of four en-suite bedrooms in the main building, two further en-suite rooms in the outbuildings and two self contained two bedroom cottages in what was the existing stable block.

The success of the latter projects has led to Raw Design being short listed for this year’s Restaurant and Bar Design Awards, showcasing their innovative and unique ideas.

“To reach the shortlist of the Restaurant and Bar Design Awards for two different venues is great for us. They’re really good awards and there’s a lot of good players creating stiff competition. It goes to show how much the industry is developing; there are a lot of very impressive design companies around now, so to be short listed from over 800 entries means a lot. It means we’re doing well.”

Moving forward, Raw Design is currently working on The Punchbowl, in London’s Mayfair for Cirrus Inns and Guy Richie, as well as a new opening in Reading and a re-vamp in Birmingham. The company, having completed the new Hucks at Woburn for CenterParcs, are also now tasked with reworking all the other existing sites.