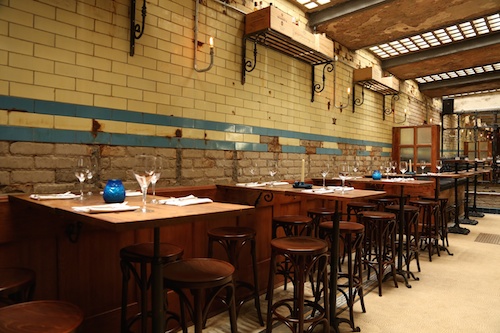 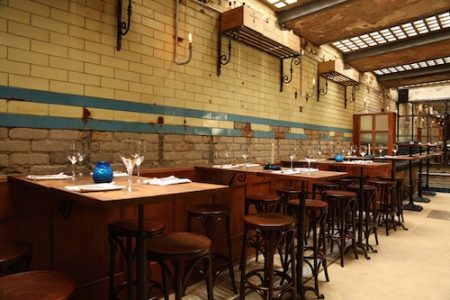 WC; a premium wine bar in Clapham, London has wowed customers from all over with its innovative design and location.

WC – short for Wine & Charcuterie – is situated underneath Clapham Common tube station and lies in an historic former public convenience.

Works to renovate the 100 year old toilet began in February 2014 and has seen the space converted into a small, intimate dining venue, designed to appeal to the areas horde of 25 year olds. Premier Hospitality caught up with WC’s co-founder and co-owner Jayke Mangion to find out more about the venue:

“Andy Bell and I wanted to open a wine bar which offered something a little bit different to the many High Street style bars and burger bars which can be found in Clapham. Clapham has one of the biggest populations of 25-35 year olds in London and so we were keen to offer them a smaller and intimate venue, which focused on sharing dishes and quality wine.

“WC is a premium venue but is still approachable and has a neighbourhood feel; we aren’t stuck up about the wines we offer. There are 12 whites and 12 reds available, all are reasonably priced and we also serve a fantastic selection of cured meat and great cheeses, amongst many other delicious dishes such as terrines and oysters.”

The venue, which seats 50 diners, opened in July this year and since opening has welcomed a plethora of guests into the innovatively designed space. Jayke said the venue was previously desolate and in dire need of renovating; sanitising the former public toilet was a huge task and one which took a fair amount of time.

The onsite team encountered some challenges during the renovation and also had to respect the partly listed venue. The space had to be fully assessed by structural engineers and the council checked the venues Listed status was respected. Sealing the premises was also a challenging task, especially as leaks were hard to contain; numerous different contractors were hired to resolve the issue.

The Fixologists; a small, independent maintenance company which specialise in the bar and hospitality company industry, acted as the main contractors during the renovation. The Fixologists, owned by Jayke Mangion, undertake the design and renovation of a lot of Jayke’s hospitality ventures including Entree Restaurant and Brickwood Coffee & Bread and so are well versed in tackling projects of this size.

The venue initially had a low bearing ceiling and so the team removed the structure to expose all the original beams and concrete structure to create an historic feel. Part of the renovation works also saw the venues original mosaic floors exposed again creating an aged feel to the space.

The venue also needed to be reinforced to ensure it was safe and so structural engineers installed additional welding support and reinforced all of the existing structures. After the structure was strengthened the team could then work on enhancing the venue’s interior.

Working with Barnes Architects in Tooting Jayke and Andy were keen to retain the spaces original features. As a result the newly opened venue boasts original Victorian blue mosaic wall tiles, impressive cast ironwork via Bronzewood, Peckham, as well as the original attendant’s office, which has been revamped into a bar.

The team have utilised the old mahogany toilet cubicles and have extended them to act as quirky, private booths. A lot of the porcelain used in the venue is Royal Dalton adding to the shabby-chic feel of the space.

Guests enter the space via a vast swirling staircase; whilst descending the stairs diners can peer straight into the kitchen area. WC benefits from a surprising amount of natural light from a ceiling pavement light which ensures the space does not feel claustrophobic. The large triple size door archway in the space as well as its impressive ceiling height adds to the sense of spaciousness.

“We have taken a desolate, condemned site; put together a business plan together and won the chance to renovate the space from over 400 applications. We’re grateful to the council for the opportunity.

“Now that it is open the response has been great from both the press and people in the hospitality industry. Everyone is intrigued and interested in the venue as it is so unique.”