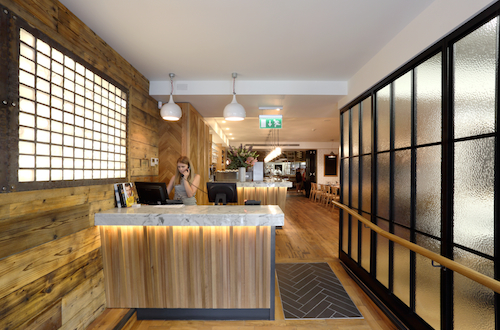 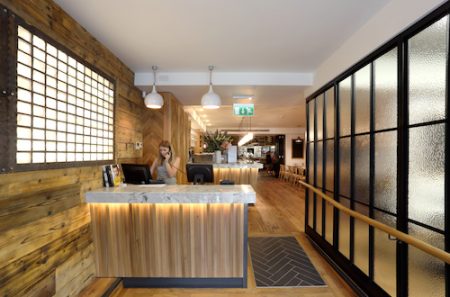 The restaurant opened in August in St. Katherine Docks, London and is the fifth venue for the Tom’s Kitchen brand which includes three locations across London and a first international flagship site in Istanbul.

The 130 cover restaurant from leading chef Tom Aikens overlooks the dock’s marina, with the deli set adjacent to the restaurant. Located close to Tower Bridge the restaurant promises to spread classic cooking and Tom’s unique style across the Capital. 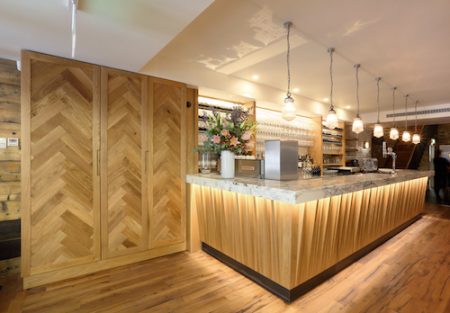 DG Professional Interiors provided the fit-out and were the main contractor on Tom’s Kitchen. DG Professional Interiors specialise in providing highly reliable commercial interior fit-out services and have previously completed projects such as Crepe Affaire in Reading; Boulestin in London; Candy Stripe in Leicester; and The Lord Nelson Pub & Kitchen in Nottingham.

Working on Tom’s Kitchen, DG Professional Interiors were responsible for the installation of air conditioning units, plumbing, toilets, a dumb waiter system, lighting and electrical work along with the installation of seating and numerous other touches that make a site like this operational. DG Professional Interiors worked alongside Michaelis Boyd Associates on the project, who were appointed as the interior design architects on the scheme.

Work began on creating Tom’s Kitchen at St Katherine Docks in March 2014 and reached completion in July 2014. The project ran as expected, with no major challenges along the way.

Speaking to Premier Hospitality about the latest venture for Tom Aikens, Helen Vara who works in Sales & Marketing at DG Professional Interiors, said:

“We have previously worked with Tom on smaller projects and we always keep in touch with his team. We were given the opportunity to work on this project and it was great to work on such a fantastic site.

“This project also allowed us to work alongside Michaelis Boyd Associates and at the same time keep up our momentum of delivering prestigious projects. We specialise in boutique-style restaurants for celebrity chefs and Tom’s Kitchen in St Katherine Docks is a perfect example of this.” 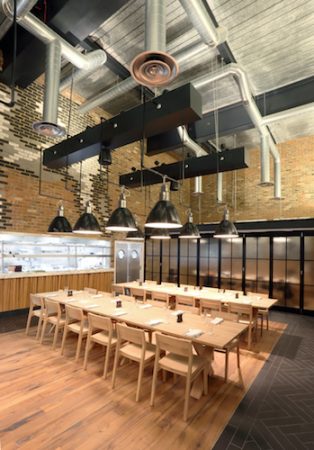 Tom’s Kitchen includes a mezzanine level as well as a private dining room which seats up to 12 guests. Features of the new restaurant include loose seating, luxury poured resin floor, exposed ceilings, leather banquettes and hanging lights. Portraits of the restaurant’s suppliers are printed on large canvases which decorate the walls, whilst guests will instantly notice a large bespoke aluminium crittal window and theatre kitchen upon entering the restaurant.

Born in 1970, Tom Aikens has been cooking up culinary delights since the age of 16. After studying at Norwich City College Hotel School, Tom forged a career in cooking and worked at high profile restaurants such as Tante Claire and Pied à Terre.

In addition to his restaurants, Tom Aikens has written three books – Cooking (2006), Fish (2008) and Easy (2011) – and has made several appearances on TV. Tom is also a keen sportsman and was a torch bearer for the 2012 London Olympic Games, carrying the Olympic Torch through the streets of Chelsea.