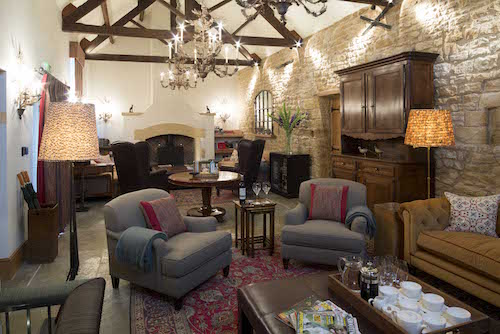 West Acre Lodge, a recently converted 19th Century dairy farm, has been recognised in this year’s SBID International Design Awards, having been nominated for an award in the New Build and Development Category.

The unique rural retreat, owned by Mount St John Sporting, has been designed with shooting teams in mind wishing to hire out the site. The newly refurbished buildings comprise 11 en-suite bedrooms, impressive sitting areas and dining rooms as well as boasting a range of facilities tailored to the needs of specific individual groups.

Premier Hospitality caught up with Averil Blundell, owner of Averil Blundell Interior Design, to find out more about the project and what it means to her to be involved in the SBID International Design Awards:

“It is really important for me to be involved; as a new company West Acre Lodge was one of my first projects. To gain recognition for this job and to see people are impressed with my work is something I am very proud of. It would be great to win but we are just happy to be nominated regardless of whether we win.”

When the site was initially purchased by Mount St John Sporting the farm buildings, which are all within the curtilage of the Listed farmhouse, were mostly derelict and so required a lot of work to be transformed into something useable. The 18 month project has seen all of the outbuildings fully refurbished, insulated and fitted out as initially the structures were all extremely run down.

The buildings did not have proper services and so a lot of work was required to renovate the site. Averil said the project was tricky in terms of layout as the existing internal walls needed to be retained due to the Listing, leaving an unusual layout to work around. Despite the challenging nature of the project the bedrooms and communal areas have been transformed into spacious, elegant spaces.

As the site is located in the North Yorkshire Moors National Park the team had to undergo a rigorous planning process; as the buildings are Listed the conservation officers were keen to know what was being done to the properties both internally and externally. DIP Architects and Averil Blundell Interior Design worked with the materials already on site to ensure that the renovated retreat looked authentic.

A rather large challenge that the team encountered was the discovery of bats on site. This posed a problem as the bats were required to be re-homed nearby; as this was an unforeseen problem the project was delayed slightly. The solution was to create a bat loft in the building for the biomass heating system which was to be installed and had been granted planning consent. In order to avoid any issues with the biomass system the team had install a bat lift above the biomass heater.

Another slight issue for the onsite team was the fact that all of the en-suite bedrooms – which have been built in the outbuildings – are only accessible via external doorways. The rooms are accessed off a courtyard due to the original layout of the farmyard; due to the layout the site became very muddy and wet as all the rooms are so exposed. Despite these challenges the project ran relatively smoothly.
The newly renovated site comprises a breathtaking sitting room which acts as a focal piece of West Acre Lodge. The space has been decorated in the style of a traditional country house and boasts an impressive double height ceiling. The space retains a number of original 19th century features, adding to the space’s charm, including an exposed stone wall and a series of exposed beams as well as two new feature fireplaces, and an array of comfortable seating.

The main building, containing the dining area and sitting room, is home to an extensive range of board games, parlour games and an overflowing bookcase in order to ensure guests have plenty to amuse themselves. The dining room, which seats up to 24 diners, offers stunning views of the surrounding countryside. The space is multifunctional as it can be adapted to be used for conferences and even as a yoga studio.

The 11 bedrooms, all situated around a central courtyard, are the ideal place to unwind after a day of outdoor sporting activities. The rooms each illustrate the building’s charm via large exposed stone walls and beams, but also have a modern twist due to the innovative interior design concept. The rooms feature a mix of old and new furniture, large baths in the en-suites and many also have separate showers. There is a high level of discrete modern convenience at the Lodge, including Wi-Fi access, intelligent lighting and TV’s in the bedrooms, and all the rooms feature stunning views of the North Yorkshire Moors National Park.