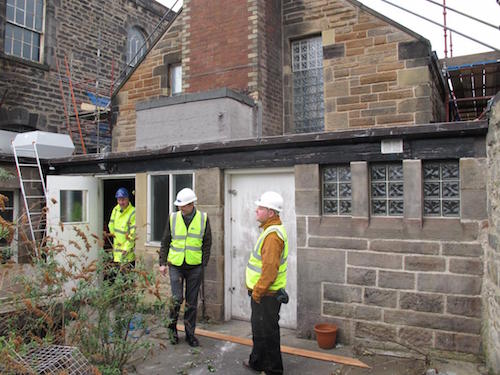 Works are progressing steadily on the Himalayan Centre for Arts and Culture in Leith, Edinburgh. Works began on site in March 2014 and are due to be complete, and the centre be open for community use, by the end of December this year.

Premier Construction caught up with Grant Williams, General Manager at the Himalayan Centre for Arts and Culture, to find out more about the project. He told us:

“The property used to be an old swimming pool and was bought by charity Himalayan Centre Edinburgh Limited with the aim of being turned into a community arts centre for minority groups in the Leith, Edinburgh area. The project involves the refurbishment of a 120 year old Victorian, sandstone building which had reached the end of its life as a swimming pool in 2009 when it was closed down by the City of Edinburgh Council.

“It is a community roots based project set up by the Himalayan Centre Edinburgh Limited’s founding members who wanted to create a space that could be used to host cultural events including weddings, theatre shows, dance workshops, comedy and live music events.”

Project Management & Consultant are acting as the main contractors during the project and Hardie’s are undertaking the role of architect and project manager. Construction works have included the removal of a few walls and the installation of a new lift, as well as extensive insulation works in the roof in order to make the building environmentally friendly.

Funding was gained from Social Investment Scotland and the Climate Challenge Fund which enabled the onsite team to convert the building into an environmentally green space. A lot of the works included installing roofing insulation, heating and windows; all of which reduce cost and the amount of carbon emissions released from the property.

Two extensions have also been added onto the property to accommodate the restaurant, cafe, toilet block and workshop space. The extensions are mainly glass in order to allow more natural light to flood the venue.

When the venue is completed guests will walk into the entrance hall which also offers access to the restaurant. The main hall lies in the centre of the venue which holds space for 200 people and is a multifunctional area; useful for hosting an array of community events.

Above the hall is a mezzanine level which accommodates a breakout space, workshop area and a gallery space. Through to the back of the building the extension houses a workshop room and the toilet facilities.

Grant said that this project will give the building a new lease of life and ensure the property retains strong links with the community, as it had when it was operating as a swimming pool. He commented:
“This venue, when completed, will genuinely change the community; already a lot of volunteers have got involved with spreading the word around the area about the project. As soon as the building opens we hope to see a lot more people getting involved and gaining access to the facility.

“We are so far on budget and on time; the main contractors and the onsite team are very aware of the time schedule and the impact bad weather could have so they are working hard to remain ahead of schedule now.”

The project value for this phase of the development is approximately £700,000; additional works may be undertaken at a later date, costing £300,000, to further develop other buildings on the site.