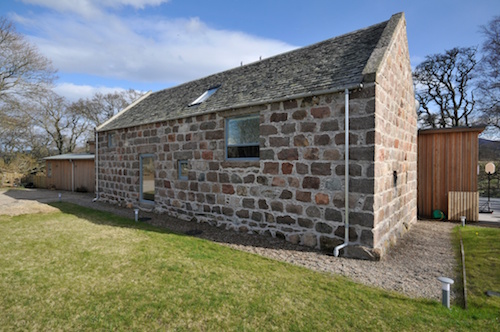 Scooping Commendations in both the Housing Category and the Sustainability Category, is an extension project at Mill of Newe – a 19th century miller’s cottage and a Grade 11 listed building in Strathdon.

The new two-storey extension comprises an entrance hall, dining room and drawing room on the ground floor and a study and master bedroom suite on the first floor. The original cottage is constructed in granite, with the new extension being built in Siberian Larch incorporating large areas of glazing, with a slate roof. The glazing allows panoramic views of the surrounding area.

Energy efficiency within both the new extension and the existing building is ensured by the scheme being designed to passivehaus principles, including high levels of insulation, airtightness, underfloor heating, the use of passive solar gain and a solar thermal array on the roof to augment the oil fired heating system. The main sources of heating however come from solar thermal power, passive solar gain and a wood burning stove which is plumbed into the heating system.

Highly Commended in both the Housing and Sustainability categories of the awards is a project at a 19th Century meal mill on the banks of the River Feugh at Little Ennochie village in Finzean. Externally the two storey building was re-pointed and re-roofed in slate, leaving its original appearance unaltered and a two new single storey extensions were constructed in Siberian Larch.

The scheme involved the creation of a complete new interior, whilst a new glazed entrance link was constructed at the front door to allow uninterrupted river views.

Eco-friendly features of the project include the use of high levels of insulation, a wood pellet boiler, underfloor heating throughout, a solar thermal panel, a feature wood burning stove in the sitting room, whole house heat recovery ventilation and the use of passive solar gain.

Earning Michael Rasmussen a third Highly Commended award in the Housing category was a project at Westwood Cottage in Insch. The original single storey cottage featured a front door with two windows on either side and a cow byre attached to the rear. Internally the building was one large open space, because a farmer had previously removed the cottage gable to enable the whole building to be used for animal accommodation.

The scale and proportions of the original cottage interior were reconstructed by the architect, using an original fireplace and a nearby cupboard as references. The cow byre was then demolished and a one and a half storey extension was constructed on its footprint. The frame allows for large areas of glazing to allow panoramic views.The extension incorporates an entrance hall, utility room, drawing room, dining room and kitchen, as well as a study at first floor level.

The cottage was restored to its original condition externally, and now contains a master bedroom with en-suite, a guest bedroom and a guest bathroom/cloakroom.