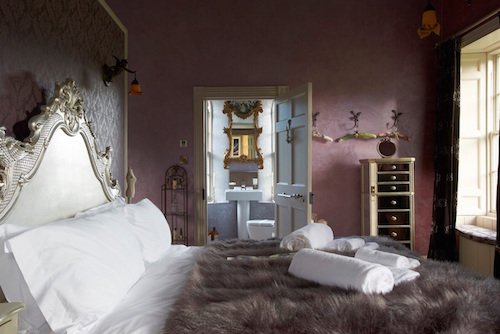 Scooping two major awards for work on a property within the walled garden of the former family home of Prime Minister William Gladstone, @architects Scotland Ltd excelled in a scheme involving the restoration and conversion of the B listed Apple House at Fasque.

The practice was the outstanding winner at the Aberdeenshire Design Awards and took the coveted Best Overall Ian Shepherd Memorial Award as well as the highest distinction in the conservation category. The Ian Shepherd awards commemorate the council’s former principal archaeologist who passed away in 2009.

The restoration of the Apple House, which dates from 1792, took six months to complete. It now forms the house’s main bridal suite and is available for bookings.

The project was described at the awards as ‘a superb restoration project using traditional skills and materials to facilitate the 18th century building being used for a new commercial usage.’

The Fasque scheme also gained a distinction in the Craftsmanship category for the restoration of a distinctive copper bath with canopy within the estate’s main house. The restoration of the 130-year-old bath, by John Bolding, was also supervised by @architects Scotland Ltd and carried out by Tony O’Donnell of Kent-based specialists Catchpole & Rye.

“The Apple House project presented a challenge in that it was carried out within the constraints of requirements imposed by Historic Scotland, Listed Building consent and planning regulations, in addition to key considerations posed by the Scheduled Landscape in which the property is situated,” Paul Fretwell of @architects told Premier Construction.

Initially the property was in a very poor condition and was listed in Scotland’s Buildings at Risk Register, he said.

Internally, the building was just a derelict shell comprising two main rooms with a small turret room at either end on each floor.

“We managed to source old photos and other points of reference to reinstate key features of the building’s interior such as architraves and skirtings, fireplaces and bench seating underneath the windows,” said Paul Fretwell.

Underfloor heating and new lighting was installed together with new plumbing and the building was completely re-wired. The original staircase was retained and repaired and the all the walls throughout the building, as well as the domed ceilings of the two turret rooms, were lime plastered.

External works involved a vast amount of stonework restoration and repair, as well as re-pointing. The original sash and case windows were repaired, the roof was re-slated and new leadwork was installed.

Owing to the fact that the Apple House is fairly small, it was necessary to construct a small lean-to structure with a green oak frame on one of the walls of the walled garden to house the building’s services.

The Apple House now features a main lounge with a compact kitchen in the turret room on the ground floor, with a bedroom and toilet on the first floor.

“It’s the team effort that wins awards with projects of this nature. It reflects the hard work and commitment of everyone involved,” said Paul Fretwell.

The copper bath, located within the main house was commissioned by Gladstone in around 1880, especially for his Aberdeenshire residence. The bath was discovered by Paul Fretwell in a back room of the residence and was covered by several layers of magnolia paint. It has been restored and returned to its original splendour with sensitivity and diligence, so that it now functions perfectly and appears at its best.  A skilled army of metal polishers, enamellers, engineers and electro-platers were among those who undertook the project.

“What is particularly unusual is that the bath has a copper canopy and is believed to be unique,” said Paul Fretwell, adding that the bath has several functions including spray jets within the walls of the canopy, as well as a wave function.

“After an exhaustive search by the client, we were contacted by their architects about restoring the canopy bath. There was quite a lot of excitement when we received the image of the bath in situ, because even though it was covered in layers of paint we immediately identified it as a John Bolding original.

“We removed the layers of paint from both the surface of the canopy and bath. It was quite a delicate job. The exterior of the bath was then polished by hand. Whilst undertaking this task we could see the incredible level of craftsmanship involved in the construction. Some minor leaks were repaired within the canopy paperwork. All the brassware – taps, shower head and pipework was stripped back to its brass base, re-engineered, polished and returned to its original nickel finish.”

“We were privileged to be given the opportunity undertake the restoration. And to understand more about the craftsmen and their techniques who conceived such a monumental piece. To have our endeavours rewarded by Aberdeenshire Council, and recognised by Historic Scotland and Scottish Natural Heritage, was a very unexpected honour.

“We have been working in the industry for the past 25 years but have never seen anything of this calibre before. Older baths are traditionally made from cast iron and although there are copper baths out there, this one is extraordinary.

“Most people associate baths with Shanks but the quality of John Bolding’s work is outstanding and to see a copper bath of this magnitude from Bolding is unique.”