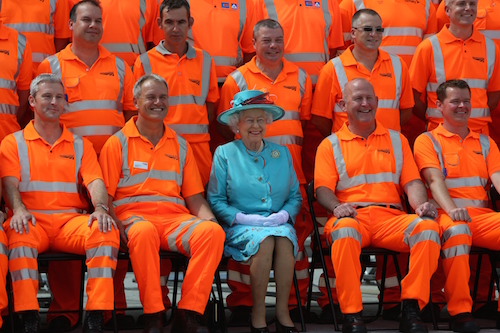 The redevelopment of Reading Station has now been completed; however works to refurbish and improve the surrounding areas are due to complete in spring 2015.

The Network Rail project began in 2010 and was officially opened in July this year by Her Majesty The Queen in a momentous opening ceremony.

Premier Rail News caught up with Matt Jackson, Project Manager for the Reading Station Area Redevelopment, from Network Rail to find out more about the project. Matt said:

“The project has seen the creation of new transport interchanges, the modernisation of Reading Station, the construction of five new platforms, renumbering existing platforms, creating new entrances within the station, as well as a creating a new footbridge that provides escalator and lift access to all platforms.

“Although the station work is complete works are still ongoing for the general area redevelopment project. The other elements of the project involve the construction of a viaduct, as well as extensive track and signalling works. The point of the project is to unblock the bottle neck at Reading; the first stage of this scheme was to construct a new station with a bigger capacity before undertaking the other elements due to complete next year.”

The viaduct, currently being built, lies to the west of Reading and will take fast mainlines over freight and relief lines enabling the railway to cope as demand for train services increases. Benefits of the new track and platforms include less delays and reduction of the need for passengers to queue while approaching the station. The new track that has been constructed also offers space for six extra freight trains each day taking around 200 lorries a day off the roads.

Both rail bridges situated over Cow Lane are being widened in a bid to reduce congestion and allow double-decker buses to pass through with ease. The project will also see the construction of a new cycle way and pavement.

The main contractors on the project are international engineering and construction group, Costain and HOCHTIEF Construction. The onsite team worked closely with First Great Western and Cross Country during the station scheme managing to undertake the station works on time and without major disruption to the travelling public.

In order to minimise disruption to passengers, as the station remained operational during the scheme, contractors worked behind hoardings. The team also staged the works so that none of the existing platforms were closed before the new ones were ready ensuring that there was always capacity for the travelling public. The team also utilised the Christmas and Easter holidays by bringing new platforms into use during this time.

Matt said that feedback from online media has been very positive, he commented:

“The station is very light and airy now compared to how it was, as being spacious and offering additional retail outlets and seating areas. Another benefit is visible at rush hour as there is now much more capacity to facilitate the ever increasing passenger numbers.

“One of the key things about this project is that it has allowed the station to facilitate the Reading Festival much more efficiently than it used to. The project was designed to deal with projected passenger numbers expected in 2030 which will be a 100% increase from today’s numbers.”

When asked what it meant to be involved in the project Matt responded:

“This project has been my life for six years and it has been very rewarding to work on such a prestigious project. This station development is a precursor to the redevelopment of the whole route.”

In the National Rail Awards 2014, Network Rail was highly commended for the redevelopment of Reading Station.

The constituent parts of the project include the construction of a new Thames Valley signalling centre, as well as the creation of four new platforms on the north side of the station. A new south side platform and platform extensions for Waterloo line services have also been undertaken as well as a grade separation of the track on the east side of the station.

A grade separation of the western chord from Oxford Road Junction to Westbury Line junction has also been undertaken with extensive track layout reconfiguration works. The extension of Crossrail services is being pursued and the introduction of AirTrack services to London’s Heathrow Airport will also form part of the scheme.

“This is a flagship station, so it was great to be involved with this project.”

“As an innovative company we are proud of our ability to create solutions which meet the needs of our clients.”