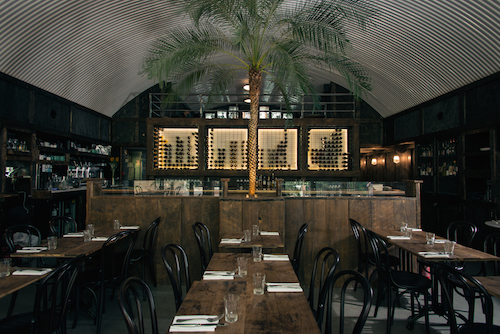 The venue, situated in Bethnal Green, is the couple’s second venture and follows the successful launch of their first venue Sager + Wilde in Hackney.

Mission has been modelled on the budding entrepreneur’s favourite neighbourhood in San Francisco where they previously lived and worked. Mission also makes reference to the name given to the first grape ever planted in California’s wine region.

The new venue is located under an old railway arch and ex-Balls Brothers wine warehouse on Bethnal Green’s Paradise Row. Mission spans two floors with the bar and kitchen space on the ground level and a private dining and wine cellar upstairs in the mezzanine area. The bar and kitchens design takes inspiration from the London railways which are referenced in gunmetal bronze bar top and venues urban tones. The design also evokes a Californian feel, again harping back to the owner’s previous life.

Large sliding doors stretch along the entire façade of the building flooding the venue with natural light, and a striking, living palm tree features in the centre of the venue introducing a splash of colour to the space. This design feature aims to give guests a sense of being in a sun-soaked Californian vineyard, in the heart of the East End of London.

The venue boasts a 150 strong wine list with wines from the West Coast of America taking precedence, in particular the next generation of wine makers who are the pioneer producers in the area, such as Broc Cellars, Hirsch, Mount Eden, Tatomer and Scholium Project. The wine list will also feature a comprehensive selection of wines from the Old World.

Mission has followed in Sager + Wilde’s footsteps by offering diners the chance to experience fine wines, most of which are of limited production. Wines are sold by the glass and by the bottle and served by knowledgeable and specially trained staff. The cocktail list boasts distinctive ‘3 sip’ cocktails alongside Post Card tea, and coffee from Californian guest roasters.

A British and Mediterranean inspired menu of snacks, small plates and sharing dishes are also available, all created by Head Chef James De Jong, previously from The Drapers Arms in Islington.

After a short period at Gordon Ramsay’s Maze Grill, James De Jong went on to work at award winning pub The Drapers Arms and it was here that he learnt the importance of seasonality, and not messing around with ingredients and flavours. James was soon promoted to head chef and went on to cook with influential chefs such as Henry Harris and Tom Oldroyd, and also appeared on Raymond Blanc’s show, “How to Cook Well”.

Seasonality is of the upmost importance for Mission’s simple menu, which has been created to complement Charlotte and Michael’s wine selection, with dishes such as Duck Pappardelle, Ox heart tartare, Rose veal chop with caponata and anchovy, and Mackerel with pickled gooseberries and horseradish.

Owner Michael Sager-Wilde has operated bars all over the world including in London, Berlin, Zurich and San Francisco and is an award-winning bartender, previously bar manager at Milk & Honey and The East Room New World Wine Room. He was also the wine director at Quo Vadis before moving to the USA to be the Bar Director at Locanda, before being promoted to run California’s best wine bar, RN74.

With impressive experience in the industry Charlotte and Michael are ideally placed to open up their second venue.