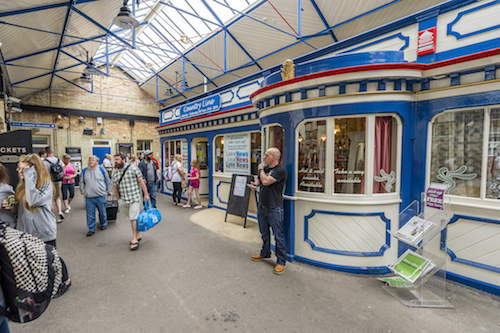 Mr Portillo presents BBC’s Great British Railway Journeys and was joined by the Mayor of King’s Lynn, local councilors and project contributors to celebrate the station’s makeover as well as the town’s railway history.

Rail Construction News caught up with Paul Prentice, the Senior Facilities Manager from King’s Lynn operators Govia Thameslink Railway (GTR), to find out more about the scheme of works.

Works began on site for the project in April 2013 and ran for a year after the project was initially commissioned by Network Rail to update the hardwiring system of the station. However during the initial process Network Rail took into consideration the rest of the station and decided, due to its dilapidated state, works should be undertaken to restore the site to it original Victorian state.

“The work carried out at King’s Lynn station is part of our ongoing investment programme to upgrade the rail network. The improvements made, including refurbishing the booking hall and providing better lighting, will give passengers a much better environment to travel to and from.”

Osborne’s acted as the principal contractor on the project, working alongside GTR and Network Rail. Paul Prentice, from GTR, said:

“The old British rail signage was installed and the platforms were also resurfaced, as well as the booking hall roof being restored. The station’s brickwork was repainted with original old lime mortar and the flooring inside the booking office was replaced, as it had rotted.

“Another aspect of the project saw traditional Victorian benches installed. The benches were provided by East Coast Castings and boast the old railway logo in the metalwork.”

The local community was at the heart of the project, providing advice and opinions on the design of the new-look station. The Fen Line Users’ Association was heavily involved in design aspects including the Victorian era colour scheme of navy, cream and red which reflects the livery of Great Eastern’s steam trains, while the gold indicates King’s Lynn’s role as a royal station.

The station remained fully operational during the scheme of works with some works undertaken at night and the rest carried out by redirecting trains to unused platforms. The aim was to create minimal disruption to the public. 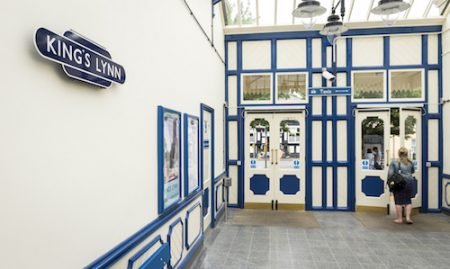 The main difficulties encountered by the onsite team were the removal of numerous communication cables. All of the IT, telephone and power cables needed to be removed from the station’s original brickwork; one of the cables was attached to the stations early warning system. It had the ability to bring the whole system down and so took the team much longer to deal with than anticipated.

“Being involved in this project makes me extremely proud; restoring the station back to its Victorian splendour was a great achievement for us. I hope these types of projects are rolled out to other stations. This project has also proven to customers that we care about them and want to give them a nice accessible station.

“The station now boasts automatic doors at the front of building. The project has achieved all its aims and has proven that when our team works as an alliance with Network Rail we can achieve great things. I would like to say a big thanks to Network Rail, Paul Meenan the Project Manager for FCC, and the general public for their support which they showed throughout the refurbishment of the station. I would also like to thank Osborne’s and all their subcontractors who took part in the project.”

Railway engineering specialists, TJ Civil Engineering Ltd was involved with platform resurfacing works on the King’s Lynn Station refurbishment project. The work ran as planned, with the company experiencing no major challenges during their involvement.

“We get involved with a range of rail projects, from overground schemes to underground works and it was great to play a part in the King’s Lynn Station project.”

“At TJ Civil Engineering Ltd we pride ourselves on the quality of our work.”

M&F Decorators was involved with sand blasting and a full programme of decoration works at King’s Lynn Station. The company works on a broad range of projects, in both the commercial and domestic sectors, and valued their involvement on this refurbishment scheme.

“It was important for us to be involved with this project at King’s Lynn Station, which was a real team effort.”

PI Consult Ltd are a mechanical, electrical and public health design consultant based in Kent. Most recently the firm have worked alongside main contractor Osborne’s during the King’s Lynn Station project.
We caught up with Ian Blow, Director of PI Consult Ltd, to find out more. Ian commented:

“We acted as the designer for the relighting and rewiring of the whole station. We had to put proposals forward for the lighting scheme that met English Heritage requirements as the building was listed. We had to ensure the fittings were in keeping with the stations look, as well as hide the installed services as best as possible.

“It was important to be involved with the scheme as it is a prestigious project. We also love undertaking projects on Listed buildings as well as enjoying working for Osborne’s, who are along term clients of ours and we always look to support our clients.”