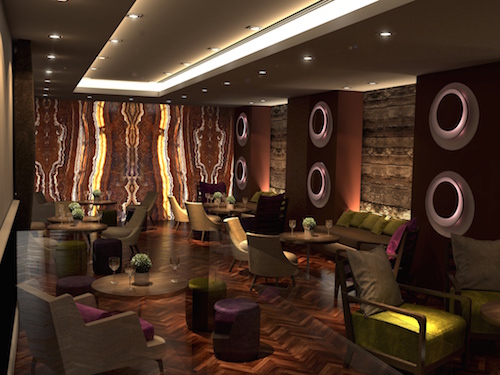 Salmontini Le Resto, the first restaurant outside the Middle East for award-winning brand Salmontini, is about to make its UK debut in the heart of Belgravia.

Born out of a desire by founders and owners Jason Bassili and Hussni Ajlani to create a restaurant serving the finest smoked salmon in stylish yet convivial surroundings, the first Salmontini restaurant and gourmet boutique opened in Beirut in 2001. Since then a further Salmontini eatery has been established in Dubai.

Overseen by co-owner and managing director Jason Bassili, who first helped in his father’s smokehouse at the age of four and has since worked in every sector of the family business, the Pont Street restaurant is due to open on October 16th 2014.

“My father started the whole thing 20 years ago trading smoked salmon in Beirut. When the Lebanese government imposed a tax on smoked salmon from Scotland, he flew over to Scotland to learn how to smoke salmon himself. He started by doing this on his balcony before expanding several years later. In 2001 he met his business partner and that’s when we started Salmontini,” Jason Bassili commented to Premier Hospitality.

Salmontini Le Resto’s gorgeous interiors have been designed to complement the fuss-free, pared down nature of the food.

The venue has been completely transformed after being taken over from The Palm. “We replaced everything including the kitchen and even knocked down two of the internal walls,” said Jason Bassili.

Industrial chic meets sensuous luxury is the motif that runs through the entire space.

The first floor encompasses a casual and comfortable bar and lounge area together with a more formal 86-seat space, complete with a Royal Dining Table for 10 people.

Downstairs houses a stunning private dining room, capable of seating up to 36 people, and featuring amber coloured columns and an incredible wine display. Equipped with state-of-the art facilities, it will present the capital with a unique space for private and corporate events and intimate dinner parties.

Tables and chairs are Italian and the lighting has been designed to change according to the time of day – with separate programmes for lunchtime, afternoon and dinner.

“We had an existing mahogany floor which was almost black. This was sanded down, freshly re-varnished and is now a beautiful warm shade. In the main dining room an existing skylight had been covered with brown silk. This was removed to allow more natural light into the venue. We transformed the decor and have also added abstract paintings to introduce more colour. I also installed a beautiful piece of yellow and honey coloured onyx on the back wall of the dining room as a feature,” said Jason Bassili.

“I see the restaurant as an extension of my house and like to get to know my customers well, so I wanted to create a welcoming environment that they feel comfortable in,” he added.

The light and varied offering will be spearheaded by a variety of cold and hot salmon specialties, light salads, fresh Mediterranean fish and meats, including the restaurant’s perennially popular Entrecôte ‘St Germain des Prés’. These will be complemented by an extensive array of sushi and sashimi.

The restaurant also offers a comprehensive wine list, overseen by a team of experienced sommeliers, whilst its mixologists will prepare a cocktail collection featuring a new take on classics, together with house specialties.